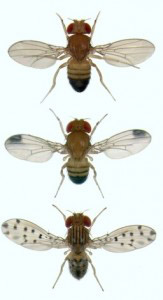 It’s not often that we find many similarities between ourselves and insects. A new study however may have us identifying a bit more closely with them…that is in one respect. New research has revealed that fruit flies who are rejected time and again sexually are more inclined to take comfort in drinking alcohol than those who had mated recently.

Researchers have found that these behaviors appear to stem from a lowered level of a chemical in the brain called neuropeptide F (NPF) in the forlorn flies. Furthermore, researchers think that the level of this chemical in the body can impact a fly’s “reward system.” This is solid evidence that these insects appear to self-soothe or self-medicate in times or rejection. Think of how many times you have seen this same type of scenario play out in not only the media, but in real life as well.

This study was recently published as part of the online journal Science. It appears to prove that while we have evolved in nearly every aspect, the the brain’s reward system has stayed relatively steady throughout time. It also shows that addictive patterns or habits are not only limited to the human species. In fact, researchers identified that the level of the brain chemical that regulates appetite also predicts the insect’s desire for alcohol.

Following the conclusion of 4 days of this behavior, both groups were fed and were offered the food out of 4 straws. Two of these tubes offered the flies a normal diet of sugar and yeast while the other two contained sugar, yeast and 15% alcohol.

After researchers studied more, they were able to confirm that in fact these tiny flies were turning to alcohol for the same reason many rejected humans do – as compensation for their unfulfilled desire. When these brain chemicals drop down as a result of stress in flies or humans, the natural tendency is to find something to help them cope – and it appears having a desire for alcohol to sooth is not unique to the human population.