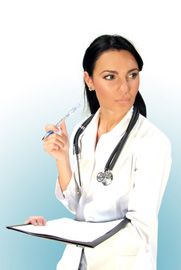 Chlamydia is the most common sexually transmitted infection in the United States today. When diagnosed and treated early on, Chlamydia typically does not pose a huge risk to reproductive health. Unfortunately, if left untreated Chlamydia can have an irreversible damaging effect on fertility in women. In men, fertility problems are less common, but may result from an untreated Chlamydia infection.

In Women
Pelvic Inflammatory Disease (PID)
An untreated Chlamydia infection can spread into the fallopian tubes and uterus resulting in a condition known as pelvic inflammatory disease (PID). PID most commonly occurs as a result of a Chlamydia or Gonorrhea infection. Fallopian tube infections may be “silent” (no symptoms) but can still cause some serious damage. Chronic pelvic pain, scarring of the fallopian tubes, infertility, abscess formation and ectopic pregnancy (pregnancy outside if the uterus) are some of the main complications associated with PID. According to the Centers for Disease Control and Prevention, it is estimated that 750,000 women experience an episode of acute PID every year in the United States. More than 75,000 women a year may become infertile as a result. While PID can be treated, the reproductive damage caused by the infection cannot be reversed.
Treatment: Antibiotics, hospitalization (only if the case is extreme, woman is ill etc.), surgery (if symptoms are still severe or an abscess has developed).

Susceptibility to HIV Infection
Those with untreated Chlamydia are more likely to become infected by HIV if in contact with the bodily fluids of an infected person.
Treatment: Prevention methods – safer sex practices, condom, testing etc.

Pregnancy complications
Even when the pregnancy is not ectopic, Chlamydia can have a very harmful effect on pregnancy. Untreated infections in the mother may lead to premature delivery of her baby along with possible eye (conjunctivitis) and respiratory tract infections (early infant pneumonia).
Treatment: The infection can be treated during pregnancy with specific medications prescribed by the doctor and safe for pregnant women.

In Men (Rare)
Most men are not at risk for many complications as a result of Chlamydia infection. In rare instances, the infection will spread into the tube that carries sperm from the testis (epididymis), resulting in fever, pain and (only very infrequently) sterility.