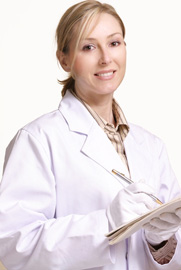 According to Avert, in 2008 46,277 cases of syphilis (all stages) were reported in the United States.

Knowing your STD status is important not only for your own health, but for the health of your partner as well.

Syphilis is a highly infectious STD caused by a spiral-shaped, worm-like bacteria called Treponema pallidum. Syphilis is often referred to as “the great imitator” because it is very difficult to differentiate its symptoms from those connected with other diseases. Signs and symptoms also frequently appear and then disappear many times as the infection progresses through its stages. Because it is so hard to identify, syphilis testing is extremely important if you are sexually active. Both men and women can be infected.

Syphilis first appeared in Europe during an epidemic in the late 15th century and while it can be treated fairly easily in the beginning stages with antibiotics today, the incidence of infected people is still continuing to increase.

Syphilis occurs in 4 stages
Primary Stage: Typically the primary stage begins with one sore, referred to as a chancre, but there may an outbreak of several initially. This early warning symptom typically occurs somewhere between 10 to 90 days of becoming infected. It may be hard to notice depending where the spot or spots occur since it is typically small, round, hard and painless, even to the touch. This chancre marks the spot where syphilis first entered into the body. On occasion there will be a swelling in the groin muscles but this swelling is also not usually painful. Most people notice that this sore (or sores) simply heal and disappears in about 4 to 6 weeks (with or without treatment), the only problem is that the infection is not truly gone – and so it moves to the next stage if not treated.

Secondary Stage: Often this may be the first stage that’s noticed by the infected person. While the symptoms of the primary stage are often difficult to notice, the secondary stage produces more noticeable symptoms. Typically a non-itchy rash will appear in one or several areas of the body and may show up while the primary chancre is still healing or, more typically, 2 to 10 weeks after the first appearance of the sore. The most common sites for the rashes to appear are on the palms of the hands and bottoms of the feet. The rash commonly appears as red or brown rough spots on these areas and sometimes they will appear on other areas of the body as well, sometimes barely even noticeably. These rashes are commonly thought to be the result of another disease, but are just another one of the difficult to pinpoint symptoms of syphilis. Other symptoms of the secondary stage may include things like fatigue, hair loss, sore throat, fever, headaches, weight loss, swollen lymph glands and muscles aches. These symptoms may repeat themselves again at a future time. Just the same as with primary stage symptoms, these symptoms too will disappear on their own with or without treatment. When no treatment is given however, syphilis progresses once again.

Latent Stage: As soon as the secondary symptoms end, the latent stage of syphilis begins. As the name implies, these symptoms are normally hidden. One of the most shocking things about this phase is that this stage can begin 2 years or 30 years after the initial infection began. In the early part of this stage, the symptoms are usually not noticeable but you can spread the infection to you partner. Without treatment, the infection becomes far more serious.

Tertiary Stage: Not everyone with syphilis experiences the serious tertiary stage damage. According to the Centers for Disease Control and Prevention, about 15% of people with untreated syphilis however, will develop these severe complications and this may happen 10-20 years after the first infection. These complications can include internal organ damage (nerves, eyes, heart, blood vessels, liver, bones…) and also has been associated with numbness, dementia and paralysis, in some cases even death.

Outlook for treatment
Fortunately, in its early stages(less than a year) syphilis is easy to cure with a shot of penicillin in the muscle. As the years go on in the life of the infection, additional and larger doses of penicillin are typically necessary. It’s important to be diagnosed early on so that treatment works faster and knocks out the infection before irreversible internal organ damage is done.