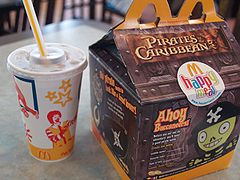 Due to a new city ordinance, starting tomorrow children in San Francisco will no longer be getting a free toy in their happy meals.

Because of the city’s new Healthy Meal Incentive law, restaurants cannot give away a free toy with children’s meals unless they contain less than 600 calories, contain both a fruit and a vegetable and do not include an excessively sugary or fatty beverage. They can however sell you these toys for a dime.

According to a McDonald’s spokeswoman, starting tomorrow parents will be able to purchase a toy separately for 10 cents when they order a Happy Meal or Mighty Kids Meal. Now I think everyone is in agreement that childhood obesity is a serious problem in this country, the rates have tripled since 1980, but is charging a dime for a toy instead of giving it away for free an actual deterrent to unhealthy eating habits?

Early this year McDonalds started changing their Happy Meals, they now offer a smaller portion of French fries and apple slices and have added fat-free chocolate milk to the menu potentially reducing the caloric count of their meals by about 20% and while this is certainly an improvement it does not make these meals healthy. Furthermore, until apple slices became a standard part of the Happy Meal, they were unpopular with both parents and children. According to an article in USA Today only 11% of parents opted for apple slices instead of French fries.

There is an ongoing debate regarding whether offering healthy options or informing the consumer about the nutritional content of food actually sways their decisions when it comes to ordering. McDonalds has been offering salad on their menu since 1985 but salad sales actually dropped through much of the last decade and with the popularity and affordability of the Dollar Menu, the healthier, more expensive items seem to appeal to consumers even less.

In a study conducted by NYU, researchers also found that young adults ordered the same calories worth of food regardless of whether they were made aware of the nutritional content or not and even though 47% of Americans claim that they want restaurants to offer healthier options only 23% actually tend to order those items.

Despite the growing awareness of the negative health effects of fast food, McDonalds is still seeing a steady growth in sales year after year. People tend to order what tastes good, rather than what is good for them and most people who go to McDonalds are not out looking for a healthy meal in the first place. It seems to me, aside from making unhealthy food flat out illegal, all these new laws and initiatives are not going to make much of a difference in America’s continuing obesity problem.