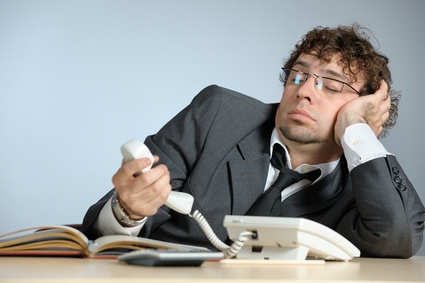 It’s happened to everyone at some point. You are sitting at your desk with multiple tasks on your “to-do” list staring blankly off into space when a coworker walks up and you are suddenly jolted from your sleep-like state. While many of us frequently have been victims of daydreaming, a new study actually proves that when we are sleep deprived, a part of our brains may literally be sleeping while we appear to be awake and active.

Researchers from the University of Madison-Wisconsin tested activity in the brains of 11 rats when they were interrupted from their normal sleeping patterns. This interruption came in the form of placing something new in their cages around the time they would normally be dozing off. While these sleep deprived rats  appeared to be awake, their brain activity actually displayed “slow wave” sleep patterns, as described in a recent TIME Healthland article. This is essentially the type of dreamless sleep that individuals experience nightly as part of their normal sleep patterns proving that not all of the brain is actually awake when overtired. This same test would need to be completed in humans before we can absolutely be sure that we are affected in the same way, but we can attest to the fact that when we are overtired, it definitely feels like at least a part of us is sleeping…and the rest of us would like to be too!

This type of “spaciness” or inability to concentrate is something most of us can relate to, so what are we supposed to do to keep our brains at full attention? One word – you guessed it – sleep! For those suffering from insomnia, the thought of simply getting more sleep is nearly laughable. Of course, those who can’t sleep want to sleep, they simply have trouble falling or staying asleep.

While we all know sleep is important, it’s impossible to get one consistent answer to the question “how much sleep is necessary?”

According to the same TIME article, NPR’s Iran Flatow asked a psychiatry professor at UCLA Medical school, Christopher Colwell, and his reponse was as follows.

“There is a range. … Most people, though, do need about eight hours of sleep. And this can actually be documented especially in vigilance tasks. Humans, if they’re not getting enough sleep, really perform poorly on vigilance tasks. So think of those air-traffic controllers, for example.

As you’re moving down to six hours, performance decreases on those tasks. … If you move all the way down to, like, four hours of sleep per night, then you start getting a number of neural endocrine changes in your body. So, basically, your stress levels go really high, your performance goes down, and you really get serious physiological changes with four hours [of sleep].

But most people aren’t at four hours. Most people are more like at the six-hour stage, where you see some decrease in performance but generally are getting through our days fine.”

So what are some ways that you can make the most of your precious hours of sleep?

1. Don’t sleep with the TV on: Studies have shown that the light produced by the TV can keep you from getting a better quality of sleep. (Read more: The Hidden Reason You Might be Gaining Weight)

2. Exercise: Those who have difficulty sleeping often have too much energy. Working out releases this energy along with the stress of the day which keeps many of us up at night. (Read more: Keeping Your Health Without Losing Your Sanity)

3. Talk to a doctor: If you are sleeping but still find yourself dozing off all day, you should see a doctor and make sure it isn’t a symptom of an underlying medical complication. (Read more: Feeling Tired? An Underlying Medical Condition Could be to Blame)