Study of the Day: The Marital Problems of Materialistic Couples  –  The Atlantic

More money, more problems? That seems to be the case according to a new study conducted by Brigham Young University. According to their research, which involved almost 3,500 married couples, the spouses that agreed that money was not important to them scored 10-15% higher in terms of happiness and marital stability than in couples where at least one spouse admitted to being materialistic. The study also found that when both people in the marriage put a high priority on materialistic things they tended to have more money but they also fought more because of it. According to the study’s lead author Jason Carroll their research revealed that when it comes to materialism they saw ” a pervasive pattern in the data of eroding communication, poor conflict resolution, and low responsiveness to each other.”

Parents, talk about sex, even of teens tune you out – USA Today

According to a new study, parents need to be more proactive in talking to their kids about sex, whether they are comfortable with it or not. New federal data released on Wednesday reveals that kids are listening to what their parents have to say even when they don’t act like it and that a stable home life tends to keep teens from having sex at an early age. Living in the digital age of the internet and sexting it is more important than ever to provide your teens with honest, accurate information about sex and contraception. 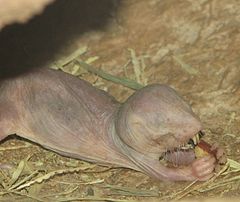 Some people say they’re ugly, some (myself among them) think that they are beautiful but what we can all agree on is that they are certainly unique. Not only do they live decades longer than any other rodent, they are also resistant to cancer and are able to thrive underground with little oxygen and light. Scientists have now sequenced the genome of naked mole rats in the hopes of better understanding their hardiness and longevity. Not only they discover genes that prevent tumor growth, they also found that the mole rat is impervious to certain types of pain and that there is relatively little difference genetically between the brains of elder and newborn naked mole rats, something that could make a significant difference in Alzheimer’s research. Love them or hate them these little guys certainly have a lot to offer the scientific community and the real work is just beginning.

Many Pills, Many Not Taken – The Wall Street Journal

Considering the fact that nearly half of Americans don’t stick to their prescription regimes, health care providers are trying to find new ways to get their patients to comply with their medication plans. Citing the increased health care costs as well as the increased health risks that result when patients don’t follow their doctor’s orders, providers are beginning to track prescriptions to see if they are being picked up as well as following up with patients via phone calls to remind them to get back on track. While there are many people out there who just forget of would rather not take their medications, for many more it is an issue of drug prices that are too high or side effects that are too severe. While it can help having more proactive follow up, there needs to be a multilateral approach if providers truly have their patient’s best interests at heart.

Whether it is drug addiction or eating disorders, far too often it is the insurance company that determines treatment rather than doctors or the patient’s best interest. According to federal law mental and behavioral disorders are supposed to get equal coverage as physical ailments but as recent court rulings show “equal” is open to interpretation. Eating disorders have the highest morality rate of any psychiatric disorder and it is estimated that 11 million Americans are suffering from this disease. Unfortunately, for those requiring in patient treatment, the options remain extremely limited. According to the Renfrew Center, the countries oldest residential treatment center for eating disorders, only about 60% of insurers cover residential therapy and hundreds of people are being turned away each from a treatment facility that could very well save their life.