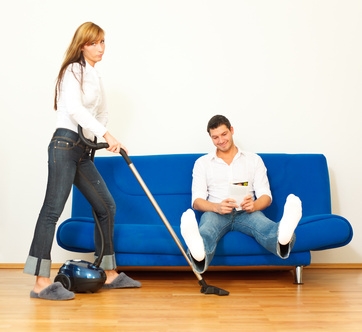 We’ve come a long way as a society in regards to gender equality. It’s more common today to see stay-at-home dads and bread winning moms, something that wasn’t fathomable in the 40s and 50s, but with both sexes working in many households, it means essentially working two full-time jobs. One from 9-5 and the next shift requires coming home, making dinner, taking care of the family and general housekeeping.

A new study however, has revealed that housework is not healthy for either sex.

This information was gathered in a study which followed 30 couples in the Los Angeles area who had kids between 8 and 10 years old and who both worked outside of the home. The children’s ages were strategically important for the study as this is a time in a child’s life were they are fairly self sufficient yet more likely to make a mess than to understand the importance of cleaning up.

When researchers followed these couples, they noticed the level of cortisol which was released during end-of-the-day housework was at an unhealthy level for both sexes when they participated in chores. Cortisol is produced in the body as a result of stress and has been associated with poor health and even shorter life spans when it is produced frequently. For those who spend a day at the office only to come home and do more work, cortisol continues to be released into the body in unhealthy levels.

So do men and women both experience the same amount of this stress triggered hormone?

The interesting part of the study found that if men came to help out with the housework, cortisol levels in the woman’s system immediately began to drop but  the only time that men showed any drop in the stress hormone levels is when they weren’t helping at all and their partner was doing all the work. So as women, how are we supposed to relate this information to our daily lives? Many may argue that this isn’t fair at all. In order to prevent our partners from experiencing unhealthy levels of stress, we need to bear the burden of housecleaning ourselves?

This by no means gives men the go-ahead to sit on the couch while their well-meaning wives or girlfriends scurry about in a frenzy, but knowing that her health is being compromised as well might lead him to help out when he can in order to ease the burden, despite his own elevated levels of stress.

Actually, according to yet another study, men may have an added motivation to lend a hand in the home.

Research has found that when men help around the house, their significant other is more likely to want to have sex. While men may not see their actions as particularly important or “sexy” on a larger scale, women see these small signs of helpfulness as indicators that a man truly cares and this is just enough to get many women in the mood.

If all else fails, perhaps splitting a small amount of chores can be the easiest way to get things done while remaining healthy and happy. Or, on the other hand, maybe hiring someone to help with day-to-day chores while you grab your Viagra and head to the bedroom can be the healthiest compromise of them all!