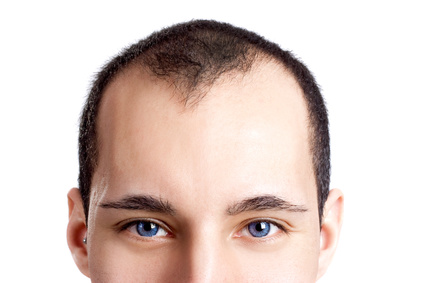 Ask any man on the street what one of his biggest fears is and you are sure to get “going bald” as a response.  Generally this fear is solely vanity related and is closely linked with the negative notion attached to aging.  However, new research suggests that there might be more to fear when a man begins to go bald at an early age.

Researchers at the Paris Descartes University in Paris studied 669 men (338 with a history of prostate cancer and the other 281 without) who were asked to rate their balding patterns at ages 20, 30 and 40.  They were also asked to specifically identify their balding pattern at age 20, using a set of pictures to determine the four stages of hair loss – no balding (stage 1), a receding hairline (stage 2), round bald patch at the top of the head (stage 3), or a combination of both types of hair loss (stage 4).  A statistical comparison was then done between the groups of patients.

The study showed that there was an association between early onset balding and the development of prostate cancer.  However, men out there should not be quick to be alarmed by this research quite yet.  There was no conclusion made that being bald earlier in life lead to an earlier onset of cancer, or even a more aggressive cancer.   It is just that there is now a proven link between the two in determining the likelihood of cancer in the future.

“With balding, we don’t need to do any tests,” Health Buzz quoted study author Michel Yassa.  “When [men] walk into the clinic, we can say, ‘Were you bald at 20 or 30?  If so, you may be at higher risk of getting prostate cancer.’”

TIME magazine quoted experts who suspect that the link between early balding and prostate cancer can be seen in the connection of the use of the drug finasteride.  Finasteride blocks the effects of androgens, and is prescribed to balding men as Propecia to retard hair growth and to prostate cancer patients as Proscar to treat benign prostatic hyperplasia.

“We need a way of identifying those men who are at high risk of developing the disease and who could be targeted for screening and also considered for chemoprevention using anti-androgenic drugs such as finasteride,” said lead researcher, Philippe Giraud to MedPage Today.  “Balding at the age of 20 may be one of these easily identifiable risk factor and more work needs to be done now to confirm this.”