Zarah birth control is a combination pill, which means it contains two active hormones which are used to prevent the fertilization of an egg from occurring. Like other similar types of medication, Zarah is often commonly referred to simply as “the pill.” It’s taken daily at the same time each day and when used just as directed, it is highly effective in preventing pregnancy from occurring. Zarah tablets work in a variety of ways to prevent the implantation or often even the initial fertilization of the egg. This is because combination oral contraceptives make changes to the mucus in the cervix as well as the uterine lining. When the mucus is thickened, it makes it challenging for sperm to travel to the egg. Furthermore, often the egg is not released but if it is, the changes to the uterine wall make implantation of an egg more difficult.

When you are deciding if Zarah birth control is right for you, it’s wise to speak with your prescribing physician. The Zarah pill is very safe for most women and it is sometimes prescribed for reasons other than simply pregnancy prevention. Some teenage women (at least 14 years of age) are prescribed birth control for cases of moderate acne. Once a woman begins having a menstrual period, the Zarah for acne can be taken safely. It may also make the menstrual cycle more predictable and steady. Zarah birth control side effects may occur so discuss with your doctor before taking.

You may have noticed that Zarah Ocella are two birth control pill names which are used interchangeably. This is because they are both generic names for the brand name birth control called Yasmin. When the original patent for Yasmin expired, several companies were able to produce safe and effective generics – Zarah and Ocella are two of them. When you compare Zarah vs Ocella, there are essentially no real differences between the two since they are chemically the same.

The Zarah pill is also used to treat women who suffer from a condition known as PMDD which stands for premenstrual dysphoric disorder. This condition is characterized by several troublesome symptoms including anxiety, depression, mood swings, headaches and weight gain. Zarah tablets have been used successfully to treat these symptoms. There may also be other conditions that a physician may choose to treat with the use of the Zarah pill. All questions you may have about taking oral contraceptives can be addressed by either your physician or your pharmacist. Online birth control is available today at KwikMed. Buy birth control online as well as other medications by prescription today. 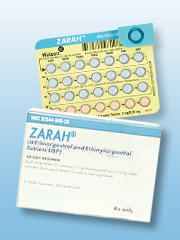