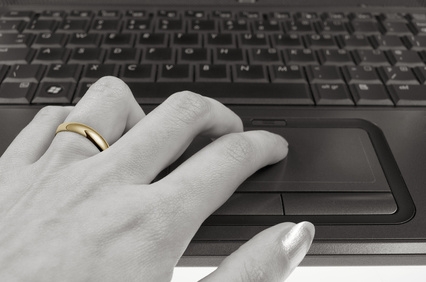 Ten years ago, I bet none of us thought we would be using the term “cyberinfidelity.”

It stands to reason that as technology improves and makes our lives easier, there will always be a downside. For those craving monogamy, dreams may be shattered by the amazing amount of distractions and temptations that are now available with the touch of a mouse. We already know from the onslaught of media news we hear on the subject of  “sexting,” (yes I’m talking to you Weiner…) and other relationship disasters that have unraveled in front of our eyes, but in real-life, these things happen to people each day and while some may brush off these flings online, a new study warns of what this sort of behavior leads to cheating in the flesh.

Online Cheating Doesn’t Stay Online…
This study was conducted at the University of Nebraska at Kearney and Washington University in Topeka, Kansas. In order to gather a group of cyber-cheating subjects, researchers were able to gain permission from the now infamous Ashley Madison site which is created for married people who want to have an affair, (yes, really) to add a survey to their site to target users as they were signing off. There were almost 9,000 completed surveys but researchers chose 5,187 adults as the main subjects for their research. What they found may (or may not) be a bit surprising to you – when compared to their male peers, women more frequently “sexted” (sent sexy/lude text messages). In addition, researchers found that  more than 66% of the people who answered the survey were in real relationships when they actually met people from the site to cheat after meeting them online first.

The study also revealed that over two-thirds of those surveyed had cheated online while “committed” to a partner and over three-quarters cheated off the site.  Yikes!

Is This the end of Monogamy as we Know it?
Before we all begin to panic, yes these numbers are in fact very high, but the survey was also conducted using only people on Ashley Madison, which has a tagline of “life is short, have an affair.” But really, there are other forms of online cheating that are a bit less intense. Of course, this in no way removes them from the category of cheating, but many of us may be left to wonder if this applies to all forms of online infidelity.

With Facebook, Twitter and LinkedIn (just to name a few) offering us connections with strangers, old flings and friends alike, the temptation is stronger than ever for even those in committed relationships to go astray. In a world where online gaming and other cyber-reality  universes are created, many may feel that if they aren’t physical with another person that they are remaining loyal. This is, of course, a sticky issue since the definition of cheating largely ranges in relationships depending on personal principles and values.

The message we can take from this study is one that perhaps we have known all along. Cheating is cheating, whether online or in-person, if you or your partner are looking elsewhere than the relationship is likely headed down the wrong path and may lead to even more hurtful actions in the future.

If we could all follow that simple golden rule of childhood, “do unto others as you would have them do unto you,” perhaps we would see far fewer online relationship scandals ripping through the headlines left and right!

What do you think about online cheating? Is it really cheating? What would you do if you caught your partner searching the Web for lovers?