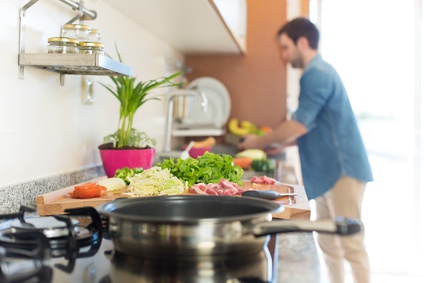 Stock your pantry shelves and fire up the stove, if you want to reduce your diabetes risk you can start my cooking more meals at home. Currently there are roughly 30 million Americans suffering from diabetes and the majority of these cases are type 2 which happens when the body is no longer able to handle large amounts of sugar.

The obesity epidemic, as it has been coined by the media, can be blamed on many people, places and things but one thing we know for sure is that the restaurant industry definitely plays a part in obesity and diabetes.  Tourists from different parts of the world are often entertained and left in awe of the American portion size that is served at the majority of restaurants across the country. It’s these same heaping portions that are consumed too often and lead to diabetes and obesity in not just adults, but in children as well.

By cooking at home, you know exactly what you will be consuming and can cut out a lot of the processed ingredients that are in food produced for the masses. Studies have shown that those who eat two to three meals at home are at a reduced risk of diabetes when compared to their peers who dine out daily.

If you are at risk of developing diabetes already, try making the switch to daily home-cooked meals and your body (and insulin levels) will thank you.