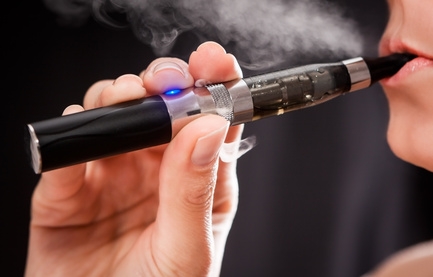 Gone are the days of lighting up on a whim in restaurants, airplanes and bars. It’s also been decades since most employers have banned cigarettes in the work place but now many are forced to reconsider their policies when it comes to e-cigarettes.

For many reasons, e-cigarettes have fallen into controversy lately. To start with, many are not regulated by the FDA, therefore the ingredients in these battery operated devices are not under the careful watch of the Food and Drug Administration. Additionally, there seems to be a grey area when it comes to smoking these indoors. Essentially, nothing more than water vapor escapes the end of the device but in some instances, people still feel like it is violating their rights.

I saw this first hand with a friend who quit smoking and switched to an e-cigarette. We were at a local bar/restaurant and as she puffed out the vapor, management was quick to come over and tell her that no smoking is permitted indoors and that a table had complained.

While it seemed odd to us at the time, employers are now facing the same dilemma. Of course most want to promote quitting cigarettes so their employees are healthier and their insurance premiums go down but how accommodating they choose to be about the alternative is so far entirely up to them. The exception to this is the recent laws enacted by three states which ban e-cigarette smoking in the workplace – New Jersey, Utah and North Dakota.

There are more than 100 cities who have included e-cigarettes into the “no smoking” rules in public places as well.

It stands to reason that as time goes on, more and more states and cities will have regulations regarding this but for now, what do you think? Does it bother you when you see someone smoking an e-cigarette in a public place?

For further reading on the topic, check out this recent Wall Street Journal article.