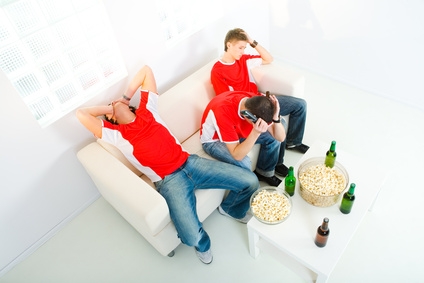 If you are a die-hard sports fan (or have one in your life), then you know when the game doesn’t go the way you anticipated it’s not a good feeling. Many may even go so far as to claim they are “heartbroken.” A new study reveals that there may be more truth to that statement than anyone thought.

According to researchers, when a loyal football fan is on high alert during a game as important as the Super Bowl, a loss can actually trigger cardiac complications and even heart attacks in some.

The study took place as researchers monitored Los Angeles residents before and after their teams two Super Bowl appearances. When keeping track of the medical events in the weeks following a loss, there was a noted increase in hearth disease and heart attack and a lower incidence after the team’s victory. In order to come to this conclusion, (according to a TIME article), researchers at Good Samaritan Hospital and the University of Southern California collected information and death certificates from before the Super Bowl and after the Super Bowl for the years 1980-1988. The main areas of focus were January and February (the months following the dramatic conclusion of football season), with one exclusion – the first two weeks of January when statistically odds are more likely for people to suffer heart attacks.

According to the article –
“Following the L.A. Rams’ 1980 loss to the Pittsburgh Steelers, data show there were 15% more heart-related deaths among L.A. County men and 27% more among women, compared with years when the team wasn’t in the Super Bowl. Conversely, after the L.A. Raiders’ 1984 win against the Washington Redskins, there was a dip in cardiac deaths on average, compared with non-Super Bowl years.”

Perhaps the most likely cause is the increase in adrenalin released throughout the body in the heat of the game. This actually causes the heart to beat faster and also leads to higher blood pressure.

Interestingly enough, the rate of death in females who did not have a passion for the sport also increased. Researchers believe that perhaps the heartbreak of her male partner and his change in mood is enough to affect her well being and cause higher levels of stress.

So as the Packers and Steelers prepare to go head-to-head in the 2011 Super Bowl, what can we do to help lower our risks of cardiac trouble? Here are some 5 tips for keeping your heart healthy this football season and beyond.

Exercise and Keep Weight in Check
With the holidays a fading memory and New Year’s resolutions stuffed away with your dusty workout equipment somewhere on a back shelf, weight loss and fitness goals may have gone by the wayside. Exercise and maintaining a healthy body weight are two factors which can help keep your heart healthy. If you aren’t sure what a healthy weight for you is, check out tools like this one which allows you to see if your BMI is healthy.

Monitor Blood Pressure and Cholesterol
These two factors for cardiac trouble can be kept in-check  when properly monitored by a health care professional. If you don’t know your status for either condition, it’s a good idea to get tested. Many people unknowingly have high blood pressure or cholesterol and are experiencing irreversible damage without any knowledge of it.

Find Healthy Ways to Release Stress
Since stress causes the “fight or flight” response that is known the have an effect on cardiac health, it’s important to find a healthy way to release this stress. Outlets are different from person to person. Some may enjoy taking a walk or even writing in a journal. Experiment and see what works best for you.

Quit Smoking
Chances are, you already know that smoking is bad for your health. With so many uncontrollable factors out there, this is one that you can take control of. It’s never too late to quit.

Have a Drink a Day
Yes, you did read that right. According to Consumer Reports, drinking a little (NOT a lot) is actually helpful for heart health. For women, this generally means one drink a day and for men its two drinks a day. In these small amounts, the “good cholesterol” kn0wn as HDL actually increases.

What do you think? Who do you want to win this year?