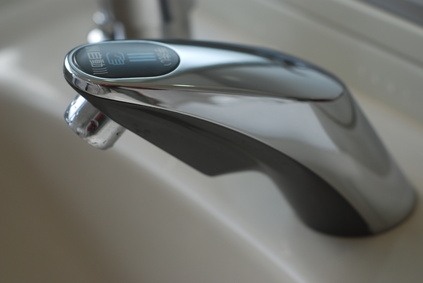 It should come as no surprise when things which are deemed “healthy” one week  are struck down the next, but when something as widely accepted and seemingly “germ safe” as the hands-free faucet comes in to question, it’s a bit more shocking.

In most newer buildings now, without question, these seemingly state of the art faucets are part of the plan. You simply stick your hands underneath them and water pours out without you having to touch the grimy faucet handle. While reading the headlines of the news stories reporting these findings seems to boggle the mind at first, don’t be too alarmed! Once you hear the entire study findings you can breath a slightly deeper sigh of relief…and still wash your hands without fear of illness!

The Study
The study, which  compared bacterial growth, took place at Johns Hopkins Hospital. There, the traditional “turn-the-handle” faucet and the newer touch-free faucets were compared side by side for bacteria count and type. While the findings appear to defy logic (and admittedly stumped researchers at first), it’s true that the hands-free sinks actually collects more bacteria.

When water samples were compared, about 50% from the electronic faucets contained legionella and other various types of bacteria. By comparison, only 15% of manual faucet samples contained bacteria.

Researchers concluded that while the traditional manual faucets have simple plumbing, like one for hot and one for cold, the electronic versions are more complex and this reflects in the amount of tubes and pipes that go into the manufacturing process. With all these extra places for water to go, it’s easier for these places to trap in moisture and consequently bacteria too! Surprisingly, even though these faucets harbor more bacteria then the standard ones, most of the time this bacteria does not pose a serious health risk…that is, except when you are talking about hospitals – lots of patients, lots of germs and often compromised immune systems.

So what’s being  done to protect patients? According to an article published on the TIME website, Dr. Emily Sydnor, who was involved in the study was quoted as saying, “The electronic faucets are in the process of being removed and the plan is to remove them from the existing hospital as well,” says Sydnor. “And the order for 1,000 to 1,100 electronic faucets for clinical and patient care areas in the new building was recalled based on these findings.”

So what we can take from this study is that for most of us with healthy immune systems, public restrooms with these types of faucets typically cause no need for concern. For those in the medical industry, this study may help eliminate the addition of more electronic faucets and as a result may help keep patients bacteria – free.

What do you think? Does this change the way you look at the bathroom sink or do you see no real cause for alarm?