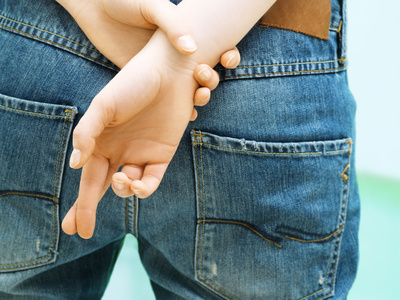 Remember when you were a kid and all it took was one look at your face for your parents to tell whether you were being truthful or not? What if it was still that easy to tell who’s being honest and who’s trying to put one over on you? Whether your husband’s claiming that he has no idea who tracked mud through the living room or your coworker’s denying any involvement in your disappearing yogurts here’s some tips for becoming a human lie detector test.

When people lie there are many subtle clues that you can be on the lookout for but a liar is always easier to spot if it is someone you already know pretty well. The number one thing you are looking for is a change from their usual habits and mannerisms. If someone is generally open and talkative and they suddenly withhold information or close themselves off chances are something’s up. While everyone’s tells are unique there are some generalities that you can make about people’s behavior when they are lying; here are some things to be on the lookout for.

While many of the body language indicators are similar to regular signs of anxiety, combined with other factors they can be a good indicator that someone is being less than honest. Someone who is being deceitful will usually avoid any physical contact putting a barrier between themselves and the person they are lying to.  Liars tend to sweat and fidget more and will either avoid eye contact or over compensate by making too much eye contact. People who are inventing stories will usually look down and to the right as opposed to people who are actually remembering details who will look down and left. This is determined by what side of the brain is being engaged.  The anxiety caused by maintaining a lie can also cause a rise in vocal pitch and dilated pupils.

People who lie need to keep track of all the stories they tell in order to keep their lie consistent. When asked a question liars will often try to buy themselves time to create an answer so watch for mumbling, pausing or throat clearing before answers are given. Liars also tend to be less cooperative and more negative than those who are being honest so they are more likely to become hostile or complain. Their content will oftentimes lack a lot of detail. They will over-emphasize irrelevant details hoping to distract the interviewer from the key issues. They will also avoid using contractions to sound more emphatic in their answers. If you want to catch someone in a lie push them for minute details and then have them repeat their story. The more details you get the harder it will be for the liar to keep their story consistent.

Humans on the whole are not very good at detecting lies, we are trusting by nature and believing others saves us time and energy while we go about our daily routine. Because we tend to avoid painful truths and want to believe compliments we are often our own worst enemies when it comes to recognizing a lie. If you need to get the truth out of a co-worker or lover these tips, while not fool proof, will help you see through their stories just be sure that you are ready to hear the truth no matter what that truth might be.