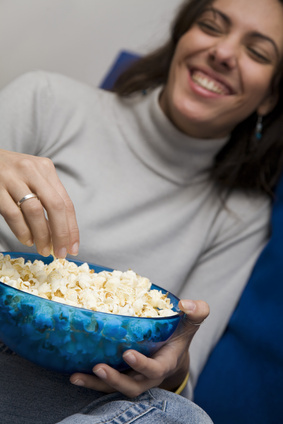 New research indicates that breaking a bad habit may be more about changing your environment and less about good intentions and will power.

As creatures of habit, humans have developed the ability to accomplish a lot of things every day without having to dedicate valuable resources to planning and thinking about them. The down side of this is that for all the good habits we indulge in like showering and brushing our teeth there are also the bad habits like midnight snacking that can take a toll on our health.

While most people try to break these bad habits with sheer force of will a new study by researchers at USC reveals that just making small changes to your environment can help break bad habits in a big way. To conduct their research regarding eating and habitual behavior a study was devised to test the popcorn eating habits of moviegoers. The researchers wanted to find out if moviegoers who always ate a bag of popcorn at the movies would continue to do so even if the popcorn was old and stale just because it was habit.

Several hundred people were brought in and surveyed about their popcorn eating habits after which they  were broken into one of three categories; those who really wanted popcorn at a movie theatre, those who sometimes wanted popcorn and those that didn’t care whether they had popcorn or not. They were then quizzed on how hungry they were and how much they liked popcorn in general after which they were led into the theater and made to sit apart from one another.

Each person was given a bag of popcorn; half were given fresh popcorn made that day and the other half popcorn that was a week old, after the movie the bags were collected and weighed. Those that reported always eating popcorn at the movies ate all the popcorn regardless of whether it was fresh or stale whereas those that only occasionally ate popcorn barely touched the stale popcorn.

A second study was conducted, this time in a meeting room, to see if much of the appeal of eating popcorn was tied to being in a theatre. This time even habitual popcorn eaters didn’t eat the stale popcorn.  To take their theory even further researchers went back to the theatre and once again handed out a mix of stale and fresh popcorn this time telling participants that they had to eat with their non-dominant hand. Once again the stale popcorn went mainly untouched by all groups allowing researchers to conclude that changing even one small thing could override the habit and reengage the thinking process.

The bottom line is, when it comes to making lifestyle changes sometimes it’s just a matter of little environmental changes; turning the TV off or taking the candy jar off the coffee table. If you have to think about what you are doing it is much easier to break a bad habit.