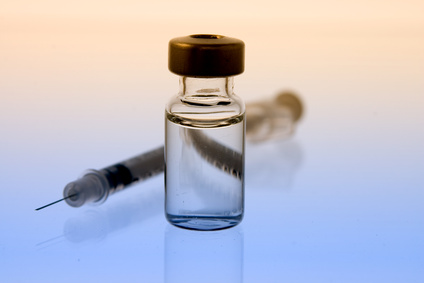 In what could be a major breakthrough, scientists have announced that they have isolated an antibody that could be used to vaccinate against all types of influenza A viruses. This is the first step toward a universal flu vaccine that could be administered once instead of annually. Researchers are guardedly optimistic that this universal vaccine could become available in as little as 5 years they announced on Friday.

The flu is one of the leading causes of preventable death in the U.S. killing 3,000-49,000 people each year and hospitalizing another 200,000. While there is currently no cure for the flu virus, vaccines which expose the body to small amounts of inactive viruses, are very effective at building the immune system to resist infection. Flu viruses are constantly evolving and mutating, each year small changes in the outer coat of the virus make old vaccines obsolete. Currently scientists have to combine several antibodies into a single annual shot depending on what kind of viruses are circulating. But in a remarkable discovery scientist have found a part of this outer coating that never mutates and it is this part of the virus that a new universal vaccine would attack.

Thanks to one volunteer in a recent medical study who had an atypical reaction to the flu virus, researchers discovered a super antibody that can fight off every type of Influenza A. Developed from human plasma cells, the antibody called F16 has been remarkably successful in lab tests conducted so far. When lab mice were dosed with what would usually be a fatal amount of flu virus the antibody was able to completely knock out the virus in all 16 known types of Influenza A. This gives rise to the hope that not only will F16 be used as a vaccine but have therapeutic uses as well. Researchers also believe that F16 will be able to prevent viral infections from animal to animal and from animal to human as in the case of swine flu as well.

Flu pandemics are still a very real threat around the world. They are entirely unpredictable and once active can be fatal. While most healthy adults can fight off the flu with a few days of rest it can be a death sentence for those with a compromised immune system. The A(H1N1) or swine flu pandemic of ’09 and ’10 killed almost 20,000 people and hospitalized people across 214 countries. If researchers are able to create a universal vaccine people could be protected for potentially decades regardless of what strain was to emerge. Not only would lives be saved but it would be financially advantageous as well. Even mild flu pandemics put an enormous strain on hospital and emergency resources not to the mention the cost of developing and administering a new flu shot every year.

While it may still be several years before a universal flu shot becomes available this is still a tremendous step forward in viral research.  For the first time doctors and scientists be able to get ahead of type A influenza instead of always running to catch up.