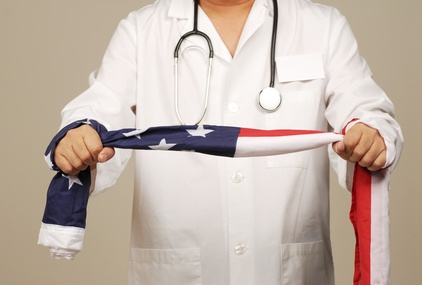 News this afternoon is popping up everywhere regarding today’s Virginia Federal Judge ruling that a portion of the  health care reform law, which requires the public to  enroll in health insurance by 2014 or face a fine, is unconstitutional.

Whether you are a supporter or a foe of the much talked about “Obamacare,” today’s news will make an impact on the future of health care as we know it. The Obama administration, however, is expected to challenge this decision.

The distinction here is that this is just one part of the total package and while the sector making health insurance mandatory is in question, the reform itself is still underway and as American citizens we can still expect big changes to come.

While many can see the logic in the Federal Court’s ruling that Congress may have been overstepping its bounds, its also hard to throw the baby out with the bathwater. If you are an American suffering from a debilitating, and by health insurance terms, “pre-existing condition,” you currently may struggle to get the coverage you need to maintain or help treat your condition. As part of the new health care reform, people will no longer be denied coverage simply because they already need to be treated by a doctor.

The mere fact that those who need coverage more than anyone else are also the most commonly denied benefits has been outraging the general public for decades. Companies will no longer be allowed to bar those who are sick starting in 2014.

Currently, the United States is the only industrialized nation that does not offer universal health care coverage to all its citizens.

So what are all the components of the health care overhaul? To me, it can all get sort of confusing.

It’s difficult to turn on any news station and not hear a democrat or a republican speaking their mind about this hot topic. With so many opinions bouncing around, sometimes it helps to see the facts laid out in front of you. Here are some of the most factual  points of the health care reform that I have been able to find. Note that each year there are different aspects planned to be set in motion, but here are a few key points.

A CNN article also summarizes what we can expect to see from the bill in 2011 in the following few bullet points.

What are your thoughts on the upcoming health care changes? Are there any point in particular that you agree/disagree with?