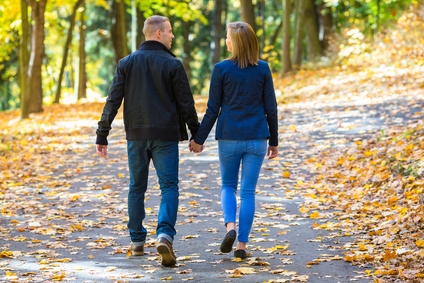 Love is a strange and mysterious thing. It seems we all have our own theories for understanding it and gauging how much our partner really cares. A new study however shows that perhaps it’s not “in his kiss” but in his walk instead.

Researchers from Seattle Pacific University in Washington discovered that when men are walking with a woman they are in love with, they slow their natural pace.

While some ladies may disagree with the finding that men in general walk at a faster speed than women, it’s been discovered once love develops, men slow their pace to match the speed of the woman they are with. Think about walking with someone who generally walks slower. Do you find yourself matching their pace? Apparently, men who are in love do.

Researchers tested this by studying 11 sets of men and women walking the track with friends of the opposite sex and with a significant other (holding hands and without holding hands). It appears that when men walk with women who are strictly friends, they maintain their faster pace but when walking with their romantic partner, they actually slow their pace to match the woman.

The ideology of why this happens, dates far back to our earliest roots and reproductive needs. In theory, the reproductive system of the women is sensitive to disturbances in energy and in the original hunting and gathering societies, women who were required to expand a lot of energy walking long distances actually had more difficulty conceiving. While of course this isn’t necessarily on the mind of the modern day man, it appears those hardwired instincts are still very much alive.