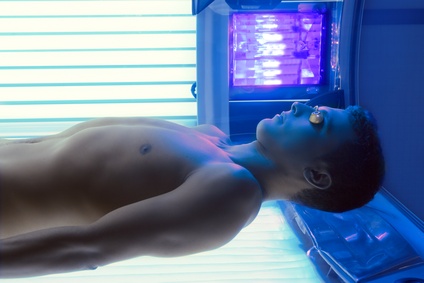 The kids on the Jersey Shore have three things that they need to do daily; gym, tan, laundry, otherwise known as GTL.  Going to the tanning beds (despite living on a beach) has become a pivotal to-do for the “stars” of the show, and their tanning antics are broadcast for all to see.  With the popularity of these overly tan stars on the rise, it is no surprise that the prevalence of tanning bed use has remained strong.

Researchers at the University of Minnesota surveyed participants about their tanning bed use, as well as their knowledge about the risks involved.  In total, 2869 Caucasian people aged 18 to 64 were surveyed for the study, and the results were published in the Archives of Dermatology.  Of those participants 18.1% of women and 6.3% of men reported tanning bed use within the 12 months.  Women between the ages of 18 to 24 had the highest percentage group that tanned indoors at 33%.

“Young people tend to think that they’re not vulnerable to skin cancer,” dermatologist Hanspaul Makkar told the Los Angeles Times.  “Most of the damage that leads to skin cancer happens before age 18.”

Dr. Kelvin Choi of the University of Minnesota in Minneapolis has expressed his concerns of the link between the increase in women under 40 being diagnosed with skin cancer and the amount of use by young women.  “Simply avoiding indoor tanning booths and beds is just the simplest way to reduce the risk of getting skin cancer,” he is quoted as saying by RedOrbit.

Despite there being a lot of discussion in the recent years as to the negative effects of indoor tanning use, only 13.3% of the women and 4.2% of the men acknowledged that avoiding the tanning bed altogether could lessen their risk of skin cancer.  “Skin cancer is the most common form of malignancy in the United States,” the authors of the study declared.  “The American Cancer Society estimated that 1 million new cases of melanoma and non-melanoma skin cancer were diagnosed in 2009; 8650 deaths were attributable to melanoma skin cancer.”

The researchers of the study have attributed this lack of acknowledgement to the amount of misinformation that is out there about possible benefits of indoor tanning.  One prominent fallacy is the notion that tanning beds offer some protection from the sun by starting a base tan, and that it can be a safe source of added vitamin D.

“People are confused by the messages from the indoor tanning industry on possible benefits of indoor tanning, e.g. getting vitamin D from moderate exposure to artificial UV radiation,” said Dr. Choi.  “This possibility is also suggested by the fact that women and men who suggested sunscreen use as a method to reduce their skin cancer risk were more likely to have tanned indoors.”

The study concludes that more communication of the risks associated with indoor tanning needs to take place in order to persuade more people to from going to the tanning beds.  Without that added clinician-patient communication people will continue to use indoor tanning despite its increased risk of skin cancer.