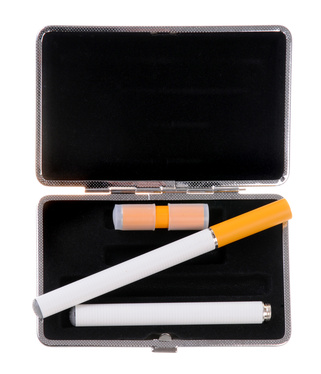 People were all abuzz about the Real Housewives of Beverly Hills.  Not just because of the extravagant way they live, or the catty fights between them, but because of the infamous “Dinner Party from Hell” episode at Camille Grammer’s home that showed an (allegedly) boozed up Allison Dubois puffing away on an electronic cigarette at the dinner table.  Of course, she was also in the midst of berating each of the housewives with her psychic knowledge as she did so, but the blaze about both actions was aflame on the web.  People were flabbergasted to see the respected medium simultaneously puff “odorless” vapors from her cigarette at the table as she blasted vaporous anecdotes at the other women. Quite an enigma indeed!

What is an e-cigarette?

As defined by Wikipedia, electronic cigarettes (or e-cigarettes) are, “a battery-powered device that provides inhaled doses of nicotine or non-nicotine vaporized solution. It is an alternative to smoked tobacco products, such as cigarettes, cigars, or pipes. In addition to purported nicotine delivery, this vapor also provides a flavor and physical sensation similar to that of inhaled tobacco smoke, while no smoke or combustion is actually involved in its operation”.  In laymen’s terms, the e-cigarette takes on the appearance of an actual cigarette or other smoking apparatuses, and is reusable and refillable.  It does release an odorless vapor to give the appearance and feel of a true cigarette.

If this is a battery operated device with no real tobacco, why would it not be safer?

Despite not burning real tobacco, e-cigarettes still release doses of nicotine.  Nicotine is the verified addictive and dangerous component of cigarettes.  The nicotine in the e-cigarettes, known as “e-liquid” or “e-juice”, still acts as a vasoconstrictor making it more difficult for the heart to properly pump blood through the body.  Also, unlike regular cigarettes, the nicotine comes in replaceable plastic cartridges causing that product to also be burned and inhaled.  When asked about the chemical extracted from these e-cigarettes, Dr. Len Horovitz, internist and pulmonary specialist at Lenox Hill Hospital, told the NY Daily News, “Medically it is exactly like a nicotine addiction,” he says. “And inhaling fumes from the plastic tubes can be carcinogenic.”

In July of 2009, the Food and Drug Administration (FDA) analyzed laboratory data from e-cigarette samples and found that they contain carcinogens and toxic chemicals.  They then issued a press release discouraging the use and purchase of electronic cigarettes.  Currently, e-cigarettes are not FDA approved and therefore are not strictly regulated.

Are there any recommended alternatives to assist in quitting smoking?

Although cigarette smoking is a tough habit to kick, there are several healthier options to help a person quit besides going completely cold turkey.  Most well known are the nicotine patches and the nicotine gums, which can be purchased over the counter.  However, there are also prescription pills that can be recommended by a physician.  For more information on obtaining a prescription, see your local physician or go to KwikMed.com for an online consultation.