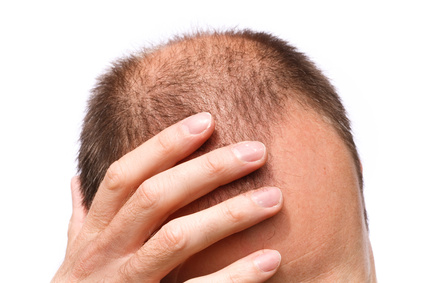 Men do not like to admit to personal vanities.  Immersing themselves in supposed womanly affectations is overall frowned upon in the man community.  However, there is one sensitive vanity that most men will admit to distressing over: losing their hair.  With hair loss affecting approximately 35 million men in the United States, men are fearful that their luscious locks will start to thin out before the impending doom of baldness.  What has made it more terrifying is that there seemed to be no real reason as to why baldness was occurring; until now.

A recent study published in the Journal of Clinical Investigation, examined the possible causes of androgenetic alopecia (AGA), otherwise known as “male pattern baldness”.  Researchers at the University of Pennsylvania tested follicles from both bald and haired skins patches of 54 white males seeking hair transplants.  They discovered that stem cells of the “follicle bulge” in the bald patches were missing the normal amount of progenitor cells that encourages hair growth.  The discovery of the stem cells in the bald sample is an important discovery because it gives hope to the possibility of re-growth.

“Previously we thought the stem cells were gone, and if that was the case it would be very difficult,” study co-author Dr. Georges Cotsarelis is quoted by Bloomberg Businessweek as stating. “But because they are present it should be possible to treat.

Although the hair follicle stems are still there they are essentially malfunctioning, thus leading to decreased hair growth.

“The follicles that make hair don’t go away completely, but they become miniaturized to the point where the hair they normally make to replace hair when it naturally falls out becomes microscopic and therefore invisible,” Cotsarelis told Bloomberg Businessweek.

Despite this being good news for the balding community, do not expect hair progenitor activating treatments to be in the market any time soon.  More testing and clinics will need to be done before anything of substance will be available for the masses.  However, there are alternative hair-loss options to partake in until that day comes.

According to the Mayo Clinic, one thing a person can do to protect their mane is to eat a healthy diet.  Research has shown that crash dieting, poor nutrition and eating disorders can lead to hair damage.  To keep your hair strong, take notice of your diet and make healthier choices.  Adding more vegetables and proteins will only increase the strength of your hair.

There are also medications that booster healthy hair follicles.  One preventative tactic is to use Rogaine.  Rogaine is a nonprescription medication that is applied directly to the scalp.  Some people do experience some hair re-growth, a slower rate of hair loss, or both.  Side effects include scalp irritation, and the effects of Rogaine halt if the medication is discontinued.

Propecia is a prescription medication option that has been approved by the Food and Drug Administration (FDA).  Propecia is a finasteride which has shown to slow hair loss and for some create new hair growth.  Propecia has been approved for men only, and positive hair growth results tend to take a few months from initial ingestion.  A very small percentage of men taking this medication have reported some sexual side effects with the prescription use.

The other option is to embrace it!  There is magnetism about men who age confidently, so allow your inner Bruce Willis or Vin Diesel to shine through. Besides, as American humorist, Don Herold, famously said, “God only made so many perfect heads; the rest he covered in hair.”