It’s been a busy week in health news and we’ve read it all so that we can bring you this week’s top 5 headlines.

Morning-After Pill Limit Marks First Time U.S. Overrules FDA – Bloomburg Business week
In an unprecedented move, the Obama administration overruled an FDA decision this week to allow unrestricted over-the-counter access to the Teva manufactured morning after pill Plan B. This is the first time that the Health and Human Services has ever overruled an FDA approval and it has become a very controversial decision. Many women’s health advocates are deeply disappointed that the administration would block access to a medication that can safely prevent unwanted pregnancies in women of all ages. According to a statement by Nancy Northrup, president of the Center for Reproductive Rights it is troublesome that any administration would play “politics with women’s health.” She issued the following in a statement this week. “It is unacceptable that the approval for drugs supporting women’s reproductive health is held to a completely different standard.”

Adam and Steve, a pair of penguins at Harbin Polar Land in China, have not only been married but have been given a baby chick of their own to raise. This happy couple had long been looking to start a family of their own, attempting to steal eggs from other couples, so when a mother penguin was over burdened with too many chicks of her own zoo keepers stepped in and gave Adam and Steve the opportunity they had been looking for. All penguins, male and female, have strong parenting instincts and share the responsibility in caring for chicks before and after they hatch so there is no reason why Adam and Steve won’t make great parents and raise a happy healthy baby chick.

FDA Approves Hangover Pill – BlackBook
Just in time for the holiday season, the FDA has approved a new pill that will help you recover from all those office parties and family get-togethers. BlowFish, a combination of aspirin, caffeine and a secret stomach soothing ingredient will soon be available over-the-counter at a drug store near you. The company claims that its effervescent tablet works faster than the traditional remedy of coffee and aspirin but no word yet regarding its ability to return your dignity in the eyes of your co-workers.

What’s Behind a Temper Tantrum? Scientists Deconstruct the Screams – NPR
For the first time, researchers have analyzed the sounds of a temper tantrum and discovered that there is a rhythm and pattern to what most of us consider kicking and screaming. They hope that in better understanding the science of a temper tantrum parents, teachers and clinicians will be better able to cope with these outbursts and be able to tell the difference between normal tantrums and signs of an underlying disorder. While this study may be extremely beneficial to parents around the world, you have to feel sorry for the poor researchers that had to listen to hour upon hour of recorded temper tantrums. 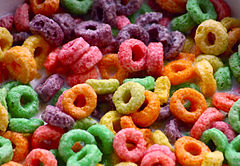 Just when you thought that enough regulations had been passed to make breakfast cereal a safe bet for your child’s breakfast, along comes a new study that reveals that some classic cereals like Fruit Loops and Captain Crunch are made up of 41% or more sugar by weight. Even cereals we think of as being relatively healthy like honey nut cheerios still contain as much sugar per cup as three Chips Ahoy! Cookies. The lesson here; be sure you read the box carefully the next time you are deciding which cereal you add to your shopping cart because looks can be deceiving.