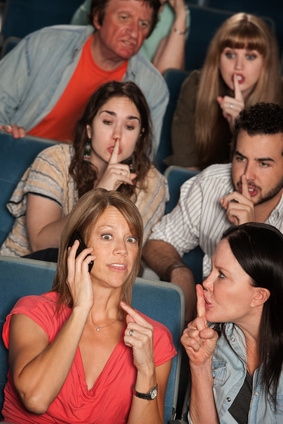 Let’s face it, we are all a bit guilty here.

When was the last time you were in a public place while talking on your cell phone? It’s practically a part of daily life.

Conversely, can you think of a recent time when you were in a relatively quiet area and couldn’t help but overhear someone nearby mindlessly chatting away on their phone?  Who really wants to hear about last night’s steamy tryst or the horrible stomach bug someone’s child has been suffering from? Yes, these topics and many others are discussed loudly over the phone daily in a variety of public places.

Even if we have committed this social faux pas, we can agree it’s often very annoying to be the one overhearing the one-sided phone call and now research backs up the reason for this blood pressure raising aggravation.

It may come as no surprise, but science has revealed that overhearing a one-sided phone call is more distracting than hearing a two-way conversation. The report was recently published in the journal Plos One and was based on the studies of researchers from the University of San Diego.

So why exactly can listening to that loud cell phone user make us lose focus on our own thoughts? Apparently, hearing half the conversation unwillingly leads our brains to make up the other side of the phone call. We essentially are filling in the blanks. It’s not that we are trying to eavesdrop, it’s a mere distraction that our brains have difficulty filtering out.

To explain it further, researchers discussed how we as a society get annoyed when the line between public and private lives are crossed. We hear people discussing things they normally would talk about at a friend’s house or over dinner and drinks while we are focusing on other things. This may be on the subway, while we are unwinding on lunch hour or waiting at a doctor’s office. If we are attempting to multi-task while overhearing these conversations, our performance level drops. This is why phone conversations in the work place can be particularly troublesome.

Another source of aggravation is that in these public situations, we are essentially held captive. Even though we don’t want to hear these phone calls, often we can’t just remove ourselves from the area. Without another thought, we end up feeling aggravated at the person on the phone. The stress response is elevated by this lack of control.

So while some conversations may be unavoidable, perhaps we can take this knowledge and remember that phone calls of a social nature can wait until we no longer have an unwilling captive audience.