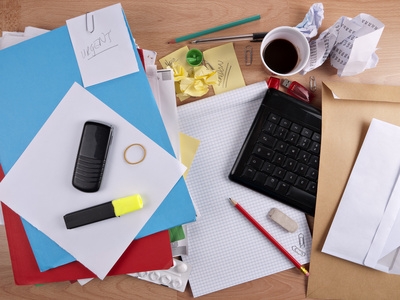 It’s Friday. Look around you.

If you are still at work, do you see piles of papers and unwashed coffee mugs or is everything in its rightful place? While it may seem that this comes down to nothing more than personal preference, a new study suggests that your desk has a much more significant meaning.

The journal Psychological Science recently published this study which examined behavior through a series of experiments. While there have been many tests regarding the psychology of those who keep desks cleans vs those who keep their desks messy, this one focused more on how the environment affects someone who doesn’t make the mess but is forced to work with it surrounding them.

In one experiment, workers were placed at either messy or clean desks and then given certain choices to make, like whether to choose an apple or a chocolate bar as a snack and other scenarios to get them to create new ideas.

When it came to deciding between a healthy and not-so-healthy snack, those at clean desks were twice as likely to choose the apple. Those with messy desks brainstormed with more creative, imaginative and out-of-the-box type ideas.

Just a little something to think about before you head out of the office.