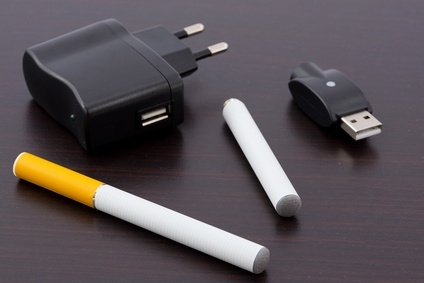 Electronic cigarettes have become popular as a replacement for conventional chemical additive loaded cigarettes helping some cut down or even stop smoking altogether. Perhaps an unintended consequence of the E-cig movement however is that children (middle school and high school) are getting their hands on these devices and the numbers of those using (or at least trying) them is ever growing.

The fact is, yes, for adults who smoke and switch to this device, the results can be beneficial but for those who are young and are intrigued by the idea of a “safe” way to smoke, the benefits can backfire.

According to report findings, 1 of 10 high school students in 2012 tried an electronic cigarette and about 3% of middle school kids had done the same. This is roughly twice the amount that was reported in the previous year.

This is alarming for many reasons but especially since the E-cig does contain the addictive chemical nicotine and other potentially hazardous ingredients. Also, they have not been fully explored by the FDA to determine their level of safety.

So what’s the lure? Well unlike regular cigarettes that aren’t particularly satisfying for anyone the first time they try them, these devices come with flavored liquid that makes them taste and smell good.

For students who have not tried conventional cigarettes, the risk of them becoming smokers and switching over at some point increases as well once the nicotine addiction has taken a hold.

For parents, these statistics are unsettling. They can help serve as a reminder however that there are an ever growing number of temptations out there and that addressing them with the family may be one more step in the right direction to helping these numbers once again decrease.