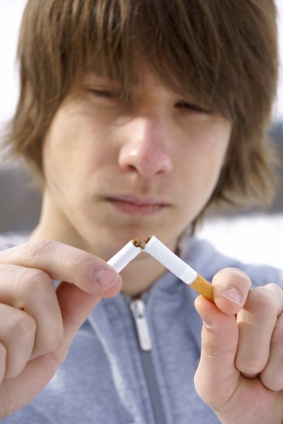 Peer pressure and cigarettes seem to go hand-in-hand for many. It’s believed that nearly 90% of all smokers begin the habit in their teen years. A new study shows that it’s not just peer pressure that may be luring  teens to smoke – it’s tobacco ads. The strange part, however, is that ads for clothing and other products seem to have little effect.

The study, which was published today in Pediatrics, shows the downside of the power of advertising, well…. unless you are a tobacco executive.

The study group consisted of 2,102 German teens with no prior history of smoking cigarettes. At the start of the nine-month observation period, 47% of students told researchers that they one or more parent smoked and 27% had friends their age who smoked. During the test period, these teens were exposed to various ads ranging from candy and cell phones to cigarettes. Six of these commercials were specifically for tobacco products.

The results proved that teens appeared to be swayed by the tobacco ads more than any other type. Throughout the trial period, 13% began smoking. Researchers acknowledge that, in addition to viewing the ads, teens were also influenced by their peers, socioeconomic status and other various behaviors. What we can all take away from this study, is that even on a subconscious level, advertising does make it’s way to the brain and of all these ads, those promoting tobacco that seem to stick. So if you are a parent, how do you help counteract these influences?

Here are 10 ways to help keep your teen away from cigarettes as suggested in this Mayo Clinic article.

1. Understand the attraction.
While you have your own reasons for saying not to tobacco, your teen is facing the pressures of trying to fit in with friends and be independent from family. If you can see the attraction through his/her eyes, you may be better able to deal with the underlying pressures.

2. Say no to teen smoking.
Make sure that your stance on teen smoking is heard loud and clear by your teen – over and over again.

3. Set a good example.
This isn’t one of those times that the old saying “do what I say and not what I do,” can apply. If you smoke, your children are much more likely to pick up the habit, no matter how much you try and warn them.

4. Appeal to your teen’s vanity.
Teens care about appearance so if the simple “it’s bad for your health,” warning isn’t sinking in, tell them what it will do to their skin and overall appearance.

5. Do the math.
Most teens begin to realize the value of a dollar when they get their first few paychecks. Remind them just what an expensive habit this will become.

6. Expect peer pressure.
Whether your teen is willing to admit that peer pressure is a large part of his/her life, it is and you know it. Practice having your teen say “no” to smoking when you discuss the various times it may be offered to them.

7. Take addiction seriously.
Explain the risks involved. Teens seem to believe that they have control over the world. Nicotine is one of the most addictive substances and will be very hard for most to simply give up once they have casually started smoking.

8. Predict the future.
As a teen, you feel that you will live forever. Nothing bad will happen to you, just other people. Use examples of people you know who have damaged their health smoking and explain how smoking increases your chances of many fatal diseases.

9. Think beyond cigarettes.
Cigarettes are not the only form that tobacco takes. Remind your teen that smoking a hookah, chewing tobacco and any form of inhaling smoke is equally as bad for their health.

10. Get involved.
Show how seriously against teen smoking you are by participating in events and other activities with your teen. They will not only see your devotion but hopefully hear other people’s stories as well.

If you smoke and you want to show your teen that it’s time for you to quit, try Chantix, the non-nicotine quit-smoking aid.