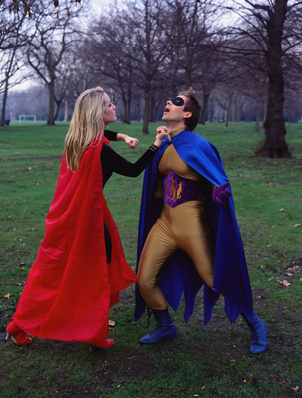 There is one monthly event that both men and women equally fear; when a woman is experiencing pre-menstrual symptoms, otherwise known as the dreaded PMS.  PMS puts all who are within a 50 yard radius in danger of random acts of anxiety, anger, crying and physical pain.  PMS inconspicuously shows up around the same time each month, lingering quietly until it seemingly comes out nowhere and unleashes its wrath of fury.  Yes, just as Gotham City surrendered itself to the crime and despair created by villains like the Joker, men and women have conceded to the PMS monster as it has made its place as a fact of life; until now.  Ladies and gentlemen, Batman has arrived.

Scientists at Brazil’s Federal University of Pernambuco have created a pill that can reduce the severity of PMS symptoms.  The pill capsule contains various essential fatty acids as well as vitamin E. Researchers believe that the contents of the pill make the body less sensitive to prolactin, which is a hormone associated with breast tenderness and fluid retention.

The results confirmed that taking the pill greatly reduced the severity of menstrual symptoms by up to two-thirds and began working as soon as three months after beginning the treatment.  No major side effects were noted and complications were rare, with only one woman experiencing a stomach ache and another with a delayed period.

The scientists of the study are very pleased with the results.  “Essential oil capsules can now be said to show much promise as a treatment,” lead scientist, Edilberto Rocha Filho told The Times of India.

The medical world is also looking to the study as a source of optimism.  Nick Panay, a consultant gynecologist and chairman of the National Association for Premenstrual Syndrome, told the Daily Mail, “It sounds encouraging and it is good to see that people are doing proper trials.”

So what does this mean for us laymen who are ready to purchase this product in droves and feed them to our love ones?  Unfortunately, nothing quite yet.  There is no set release date for the pill, and even once it is released it will have to go through the FDA for its ultimate approval.  However, that does not mean that we are left defenseless as PMS rears its monthly craze upon us.  There are alternative preventative measures that we can try in order to ease some of the pain seized against us.  Let’s call these some of the Robin (sidekick) solutions:

What are some of your tried and true PMS fighters?  Would you be willing to take or give a pill like this to relieve PMS symptoms?