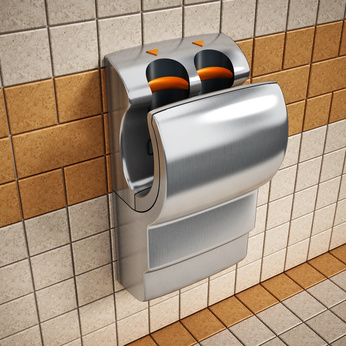 Those of us who love the ease of those public restroom Dyson hand dryers, prepared to be seriously grossed out.

Yuck! You can’t say we didn’t warn you…

The study was recently published in the Journal of Applied Microbiology.

These findings are inconsistent with what the Dyson company claimed – that 99.9% of bacteria is filtered from the air it blows around.

Researchers in 2014 found that the Airblad spread 27 times more bacteria than paper towels.

When you place your hands in those super speedy dryers, think about the bacteria you are spreading everywhere and the bacteria you may be picking up from others. Simply put, this product that has been marketed as a hygienic way to dry is anything but.

Researchers discovered this alarming information when they tested the bacteria levels by putting on gloves and washing their hands in a suspension of viruses that infect bacteria and then drying them with either paper towels, regular dryers and the jet air dryer that is essentially the Airblade.

Not only did it find the results mentioned above, but researchers also discovered that the Airblade spreads viruses much farther (nearly 3 meters across the bathroom. By comparison, the regular dryer spread the air 75 centimeters and hand towels spread 25 centimeters.