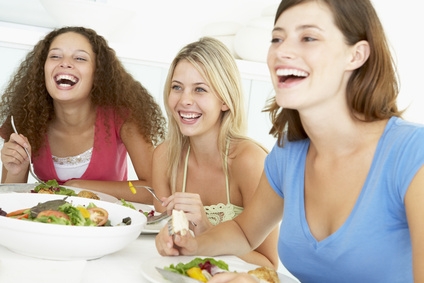 “Fake it ’till you make it.” We’ve all heard this age old advice.

New studies have found that for introverted people seeking the happiness that comes from socializing, his may actually be a good start.

It’s been proven that extroverts, or those considered outgoing, are generally happier and more satisfied with their lives. For those who are naturally introverted, the idea of going from shy or quiet to socially outgoing and gregarious may be slightly overwhelming.  The benefits of increased happiness however may make it more appealing.

So why are extroverts happier?

1. Your energy and how talkative and outgoing you are impacts the way people respond to you. If you are outgoing and friendly in your social interactions, the response from others may be more positive than if you were introverted and reserved.

2. You are more satisfied when you can openly express yourself and your opinions with others.

3. Achieving a goal, like presenting in public for example, may lead to happiness in itself. Those who feel inhibited socially may not put themselves out there to achieve their goals in this way.

Reports have found that there are also certain traits that extroverts display naturally and that motivation is one of them. This has been linked to perhaps an increased sensitivity to dopamine.

Whether you are naturally introverted or extroverted, there are a number of factors that have likely molded you that way. Genetics largely impact personality type as well as environmental factors and experiences from early on in life.

So why doesn’t everyone take the step and spice up their social interaction? For some, the idea of what it might feel like to speak publicly, or become involved in a social activity is actually worse than the feelings during the experience itself. A study conducted by a psychologist at Carleton University in Ottawa was able to answer this question more thoroughly.

Six hundred college students were involved in several studies which put them in the extrovert seat and discovered that many actually overestimated the amount of anxiety or discomfort they would feel when being more outgoing or social.

Another more scientific reason that it is challenging for introverts to act extroverted may have something to do with genetics. These people may not be as sensitive to the dopamine that is often released during these social interactions. This rush of pleasure is typically what motivates those who are extroverted to act that way. It simply feels good to them and makes them happy.

For some, being introverted may have something to do with shyness. For others, it stems simply from enjoying solo activities or opting for alone time rather than spending time in a group. No matter the reason, it’s always interesting to see what life is like on the other side of the fence.

Next time you have a chance to give a speech, join a group or interact at a business conference, try playing the extrovert role. You just might find it’s not as hard as you thought it would be!

For a more in depth look at this topic, read more here.