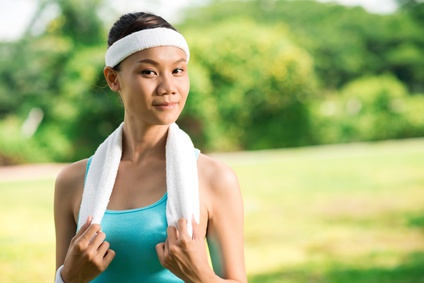 For most of us, sweat is the unavoidable, yet rather undesirable, consequence of exercise, heat or stress but science has proven there may be a lot of valuable information in sweat. So how does it go from what’s typically wiped away carelessly to a major hub of health information? The answer lies in a new form of wearable technology according to a new study published recently in Nature.

The study allowed scientists to monitor the levels of sodium, potassium, glucose and lactate in 14 men and women through the use of sticky electronic sensors. The participants then wore a special headband that contained a flexible circuit board allowing the data to stream to a smartphone app for monitoring.

So how much sweat is needed to produce a proper reading? Less than you probably think. The scientists involved in the study discovered that just one fifth of a drop of sweat contained valuable information. In order to fully test the scope of the product, participants completed a variety of exercises both indoors and outdoors and some hydrated well while other did not. In just this small amount, researchers could see electrolyte levels of dehydration in those who went without water and regular levels in those who were hydrated.

Researchers have stated that the information gathered in sweat is similar to some of the things we gather in a blood test but the perk is that sweat can be gathered more frequently allowing for long-term monitoring.