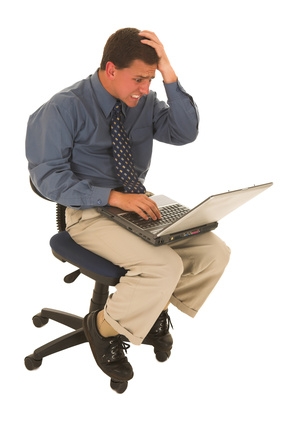 There are many things in the English language that seem contradictory (driving on a parkway or parking in a driveway) but perhaps the biggest blunder of all comes with the name “laptop.” According to new research, men are putting their sperm quality at risk when they place their computer on their lap for even short periods of time.

Study Results
While it seems that the very point of a laptop is, in fact, to place it on your lap, men in their reproductive prime may want to get in the habit of putting their computer at a desk. This new information went public in a recent issue of Fertility and Sterility. A urologist at the State University of New York at Stony Brook, Yelim Sheynkin, led the study and research team.

Thermometers were placed in the laps of men to measure the impact of the heat produced by the laptop and it’s effect on the male genitalia. The study consisted of measuring the temperatures of 29 men and while many men couldn’t feel any abnormal heat coming from their computers, their laps heated to a temperature that is considered to be unsafe for reproductive health and sperm quality. It only took 10 to 15 minutes of computer usage to reach these unsafe temperatures.

Naturally the testicles are outside of the body so that the sperm stays at a slightly lower temperature than the rest of the body to help keep them healthy.

While many think that when a couple is unable to conceive, it lies mainly with the woman’s reproductive health, this isn’t always the case. In fact, men with poor sperm quality, motility or quantity may also be the reason a couple can not naturally conceive a child. In couples who are deemed infertile, half the time it is due to male infertility. With technology taking a stronghold in the business world, studies such as this one illuminate the need for awareness about this potential reproductive roadblock.

A 2009 study conducted by Harris Interactive suggests that adult Internet users are now spending an average of 13 hours a week online, however, many who use a computer everyday for work could argue the number is in fact much higher.

What does it take to have healthy sperm?
According to the Mayo Clinic, there are three factors that make sperm perform at their peak ability: quantity, quality and motility.

Quantity – Fertility is at an optimal level when there are more than 20 million sperm per milliliter of semen.

Quality – While it’s important to have a high quantity, reproduction efforts may still be hindered if the quality is not high. This means that the sperm structure and overall shape must also be up to par. Those that are odd shaped or poorly formed are less likely to fertilize an egg.

Motility – Both of the above factors are irrelevant if the sperm cannot travel. Motility, or the ability of sperm to move, is a key part of fertilizing an egg. Fertility is most likely when at least half of all sperm are moving.

Heat can damage all aspects of these healthy sperm factors.

How can you use a laptop safely?
Researchers studied the effect of leg positioning and computer positioning on the heat of the testicles. So what impact did keeping the laptop on the knees instead of the lap?

After one hour of keeping the knees closed and the laptop still, the men in the study still had a 2.5 C increase in temperature. A special cooling pad designed to keep laptops from getting too hot showed a noticeable difference in how the actual computer felt…but not in the temperature of the lap. There seems to be no way around the temperature increase, and while no one can say that by using a laptop on your lap you will become infertile, experts believe that cutting down on the amount of time that the sperm are exposed to higher temperatures will help overall sperm quality.

What are some other ways to promote male fertility?
* Keep you weight in a healthy range
* Avoid constant stress and angst in your daily life
* Exercise regularly
* Take male formulated vitamins
* Eat your fruits and veggies
* Get plenty of rest

If you and your partner are one of the 90 million couples who are having difficulty conceiving, you may also want to have your fertility tested.