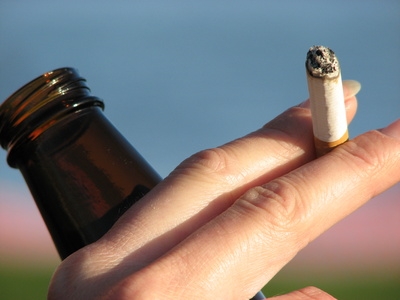 It should come as no surprise that a large part of your health comes down to how you treat your body, but two new studies drive this message home for women.

A study in the August 24th issue of the Journal of the National Cancer Institute revealed that women who have at least one drink a day (at least 7/week) may be at a higher risk of developing certain types of breast cancer. An additional article published in the journal contains a study by Taiwanese researchers  revealing that nicotine may in fact have the same impact on women. Bad news for the millions of women worldwide who have one, or even both, of these habits. In fact, according to the U.S. Department of Health and Human Services, one in five women in the U.S. is a smoker.

Alcohol and Breast Cancer Risk
Studies have been suggesting a correlation between health complications and alcohol for some time now. In fact, a study reported at the 2005 annual meeting of American Society of Clinical Oncology proclaimed that women who had as little as half a glass of wine every day were at a higher risk than women who abstain from alcohol.

The latest study published in the Journal of the National Cancer Institute broke this concept down even further. The findings suggest that women who drink at least one drink per day are more likely to develop estrogen receptor- and progesterone receptor-positive breast cancers. This new information narrows down the main types of breast cancer risks connected with alcohol, which now appear to be those which are “hormone sensitive.” Additionally, the risks of non-invasive cancers, cancers confined to the breast, were higher.

This information was gathered from the more than 80,000 participants of the Women’s Health Initiative study from 1993 to 1998. Nearly 2,000 of these women were diagnosed with breast cancer during this time period. Based upon information provided by the women, those who drank at least seven drinks per week were twice as likely to develop hormone-receptor-positive invasive lobular carcinoma. However, the incidence of the more common type of breast cancer, invasive ductal carcinoma, seemed to have no bearing on alcohol intake.

Nicotine and Breast Cancer Risk
The notion that smoking is unhealthy is far from new, but a recent study has given researchers and medical professionals some insight into how nicotine, the main chemical that causes addiction, has a carcinogenic effect on the female body.  Researchers from Taipei Medical University studied tissue samples from 276 breast tumors to see what effect nicotine had on the actual cells. Researchers found that nicotine receptors could more easily attach to the cancerous cells than the healthy ones. Additionally, when normal cells were in contact with nicotine, they took on the characteristics of cancerous ones.