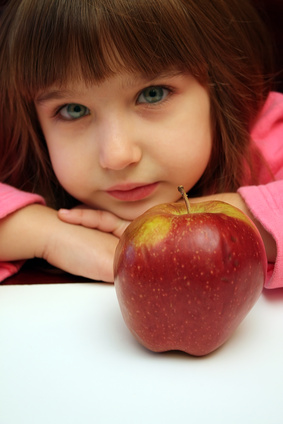 Childhood obesity is reaching epidemic proportions here in America and in response 19 chain restaurants have announced that they will start including healthier items on their children’s menus. But that doesn’t mean that French fries and burgers are going anywhere and just because you put apples on a fast food menu does it really mean that anyone is going to order them?

Childhood Obesity by the Numbers

In response to these alarming numbers and the increasingly hostile public perception of fast food, The National Restaurant Association is trying to step in line with current dietary guidelines. New menus will feature more whole grains, lean proteins, fruits and vegetables featured prominently alongside more traditional offerings. These items will also contain less sodium, calories and fat. To be included in the program each restaurant must have at least one combo meal that totals 600 calories or less and contain one side dish that has less than 200 calories.

With some 16,000 restaurant locations participating expect to not only see new menu items but to have healthy options displayed more prominently as well. Burger King for example has reduced the sodium content of their chicken nuggets and is having its staff suggest apple “fries” instead of traditional ones. IHOP is now limiting all of its children’s meals to 600 calories and is promoting dishes like fruit pancakes and scrambled eggs with fruit. In the past there has usually been one or two healthy options hidden amidst all the junk food but with this new initiative their will be a wide variety of healthy option and encouragement from the establishments themselves to choose the higher quality item.

At the end of the day you can lead a horse to water but you can’t make him drink may apply to these menu changes. While some go to fast food chains out of convenience many go because they like high fat, high calorie salty food. Just because you put apples on the menu doesn’t mean children will no longer beg for fries. Ultimately it’s going to be up to parents to ensure that their children are eating properly, not just at restaurants but all day every day.