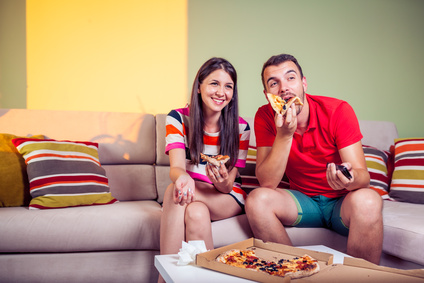 Do you find yourself mindlessly eating or suffering from the munchies for no apparent reason? Well, researchers are now confirming their prior suspicions that there is a link between lack of sleep (or poor sleep) and overeating.

The recent research was published in the journal SLEEP this week and actually proves that poor sleep triggers the same “munchies” as marijuana.

While it may seem like a stretch to compare poor sleep with marijuana effects, there is actually a scientific link. The cannabis plant affects certain receptors which were studied by researchers. Those same results appeared in study participants facing poor sleep patterns and that same need to mindlessly eat (commonly known as the munchies) occurred.

In fact, those will interrupted sleep reported feeling hungrier than those who slept a healthy amount. When given access to food, the sleep deprived group consumed twice as much fat and protein as those in the control group. Interestingly, there wasn’t a large difference in calorie consumption by each during regular meals.

This study could help health professionals better understand how the brain works and how to help their patients who overeat or suffer form obesity.

In today’s American society, we have seen a rapid increase in obesity as well as sleep deprivation and now we can finally understand the parallel between the two.

Perhaps with this new information in mind you can get plenty of rest and sleep this weekend with a better understanding of how you are helping your body!