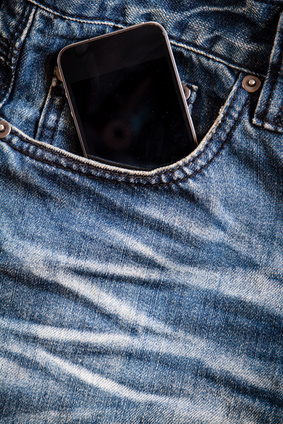 Science and medical professionals have conducted countless studies in an attempt to debunk myths and follow hunches when it comes to cell phone usage and our health. So far, we have read many headlines linking cell phone use to cancer, sleep problems and cell disturbance but now researchers believe there may be a link between cell phone usage and poor sperm quality.

The reason cell phones are believed to impact health is that they release low level electromagnetic radiation.

Researchers looked at 10 studies conducted recently, analyzing a potential link between smartphones and infertility in men. What they discovered was that in the group of 1,492, cell phones reduced sperm motility 8% and viability by 9%.

The reason for this damage however is not entirely decided upon yet. one factor to consider is that unlike most women who carry their phones in purses or bags, men typically place their phones in their pants pocket. While they may not even be aware of it, the temperature increase caused by the phone is around 2.3C. It’s a proven fact that temperature increase reduces sperm production, so this is one theory.

Another theory as to why smartphones are interfering with sperm is that the radiation is coming into play. Though it may be minimal, it’s possible that it could be enough to cause a drop off in sperm.

While the details are yet to be determined, perhaps it’s a good idea to take that phone out of your pocket just in case!