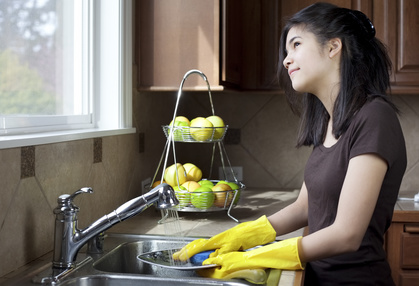 For some of us, the idea of washing dishes after creating a whole sink full CAUSES stress, but according to science, can do quite the opposite. It appears that the actual act of washing dishes can  help diminish feelings of anxiety and stress.

The study was conducted by Florida researchers who had 51 Florida State University students wash dishes. The group was divided, with half the students reading a short “mindfulness” passage about washing dishes in the moment and another less philosophical and more descriptive dishwashing passage.

According to TIME, the following is an excerpt from the mindfulness passage:

After observing both groups (those with the mindfulness passage and those with the straightforward descriptive one) the students who washed dishes in the moment and focused on things like the smell of the soap, the soothing temperature of the water and the feel of the dishes increased their level of inspiration by 25% while lowering their nervousness/anxiety by 27%. The students who only read the descriptive, dry passage about washing dishes had no reported benefit.

While this was a very small study, it shows that those who focus on the here and now even when doing the most mundane daily activities can actually significantly reduce their stress levels.