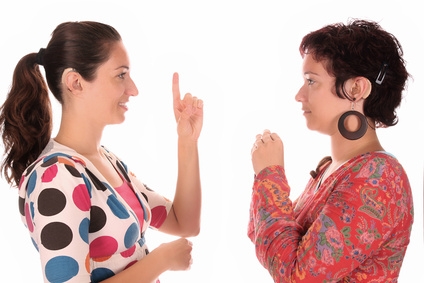 We’ve probably all heard it and many of us may have even experienced it first hand. We are typically writers or mathematicians, not both, and we see no close similarities between speaking or writing and calculations. A new study however shows that the way we first learn language can also affect our grasp on handling numbers.

Researchers came across this surprising connection when the study’s lead author, Elizabeth Spaepen, and her team ventured to Nicaragua to collect information. They studied four deaf “homesigning” adults over three separate trips to see how they handled certain numbers. The term “homesigning” is given to those who are deaf and create their own form of sign language to express their meanings. Since it is not the universally recognized sign language, it is difficult for these people to communicate with others who do not understand their language. Typically those close to the homesigner understand what he/she means but for everyone else, there is no consistent type of grammar or even a numerical system to this language.

Unlike those who learn to sign with American Sign Language, these homesigners had a very difficult time understanding any number more than three largely because they had no way to express or understand then number in their own self-taught language.

As children, deaf or hearing, we typically learn that there is a pattern for numbers. Once we know how to count, we have a better understanding what to do with these numbers and how to calculate them. Imagine though if you didn’t have any language to express the number five?

To explain this further, University of Chicago psychologist and co-author Susan Goldin-Meadow made the following statement in a public release, “It’s not just the vocabulary words that matter, but understanding the relationships that underlie the words–the fact that ‘eight’ is one more than ‘seven’ and one less than ‘nine,'” said Goldin-Meadow. “Without having a set of number words to guide them, the deaf homesigners in the study failed to understand that numbers build on each other in value.”

Researchers conducted multiple studies to come to this conclusion. One study in particular used the counting of currency to see how well the participants could understand the worth and what type or amount of currency was more than the other. During this test, the self taught signers did very well. This was thought to be due to the fact that these pieces of currency had other things which were easy to recognize like color, size and weight instead of just a lone number.

When other tests were conducted via  short videos portraying simple mathematical situations, this struggle to comprehend  and calculate numbers greater than three began to show up.

In order to create a control for this research, a second group was tested and consisted of hearing Nicaraguans who had never been to school and a third group of deaf adults who knew American Sign Language were also studied. When tested as the homesigners had been, both additional groups were able to comprehend and understand the meaning of larger numbers proving that language does in fact play a role in our understanding of mathematics and numbers.