When we are young, we’re like little sponges soaking up everything around us. The love of our families, friends, learning to speak, walk, eat and talk. For many, however, soaking up mom and dad’s secondhand smoke is part of the equation too, and later, pressure from peers to take a puff of that very first cigarette.

But for others, it’s far worse than that. Imagine being hooked on 2 packs of cigarettes a day… as a 2-year-old. 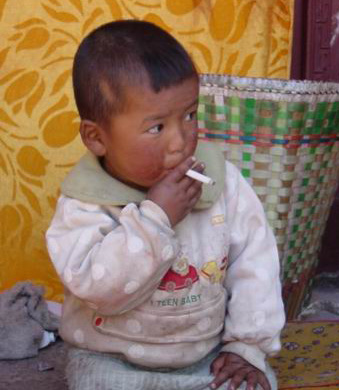 Perhaps one of the most astonishing and sickening videos to hit the Internet is, “Indonesian Baby on 40 Cigarettes a Day,” which surfaced on YouTube last month.

Introduced to smoking by his father at barely more than a year of age, this baby smokes an average of 40 cigarettes a day, with the mannerisms you would expect of a veteran 20-year-smoker, not a toddler.

He plays with his cigarettes, tilts his head back making a show of blowing smoke out of his mouth while giggling. A nicotine addict without the knowledge of what is happening to his body. This is a remarkably distressing story that highlights the need for education about the damaging health effects of cigarettes and the million and one reasons not to give a child one under any circumstances.

In the United States, this behavior would likely not be tolerated. Once discovered, action would be taken against the parents immediately. Add 20 years to that baby, however, and he would join the ranks of an estimated 45 million people who smoke in the U.S. today. 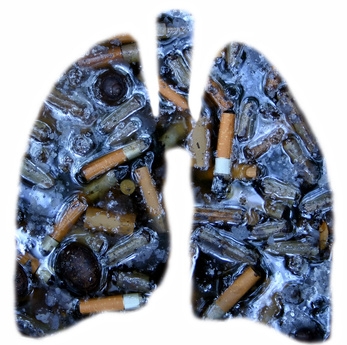 bad for them” or for those around them for that matter. Today, it is common knowledge that smoking causes a wide range of health problems – heart disease, lung cancer, emphysema – just to name a few. This is why over the last  decade, changes have been made to discourage Americans from smoking and exposing the public to secondhand smoke.

From the ban on smoking indoors, to the largest increase in tobacco taxes last March, it is clear that a large population wants to be smoke-free, so why then are there so many still clinging to that deadly pack of cigarettes?

A recent study revealed that nicotine and other chemicals may have a deeper hook in American smokers than anyone thought. The report published in the June issue of Cancer Epidemiology Biomarkers & Prevention, revealed that there are in fact more harmful chemicals in many cigarettes sold in the U.S. than nearly anywhere else, when compared to the contents of cigarettes worldwide.

All 50 states designate a Quitline for smokers and often distribute free or low cost stop-smoking aids. Perhaps this seems too good to be true… and now with the changing economy – it is. With most states being forced to make budget cuts, what was once a full public service is likely to become simply a support system, no longer with the tools to help the actual nicotine addiction.

News hit the Web today that Iowa will no longer be offering these stop smoking freebies.The sad part about this is that often community is not enough to help a person quit their deep rooted addiction. Support combined with smoking cessation aids is thought to be the most effective way to stop smoking for many.

For those who want to stop smoking, there are other options available.

Chantix is a nicotine-blocking prescription drug that has proven to be effective in helping to reduce and eventually eliminate the urge to smoke…and it doesn’t even contain nicotine. When you smoke a cigarette, receptors in the brain react to the nicotine and release dopamine which makes you feel happy and relaxed. Chantix acts as a blocker, not allowing that pleasurable “smokers euphoria” by cutting off the nicotine on the way to the brain.

After a personalized program is developed, the urge to smoke typically dwindles away as the medication is tapered over time.