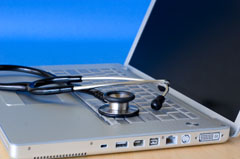 Telemedicine technology not only brings efficiencies and cost savings to existing medical services, but also expands the reach of medical services into areas where there were none. Examples include off-shore oil rigs, and prisons; limited-access locales, which make medical care difficult and expensive.

As reported in the New York Times, a company called NuPhysica is offering telemedicine services to off-shore oil-rig workers.

With video conferencing and remote monitoring devices, a doctor onshore can assess a patient and recommend a care-plan to an on-site paramedic, or decide that the patient should be transported to an onshore facility.

California is spearheading a new plan to utilize telemedicine in its prisons, where a doctor can see inmates face-to-face via video conferencing. The savings in inmate-transport and security details could be $1.2 billion per year.

The barrier to these services reaching the mass-market, general public is insurance reimbursement. Most insurance companies are not yet structured to compensate care-providers for practicing telemedicine. A family doctor could potentially help more patients in a day with telemedicine, saving patients time and money, but he may not get paid for any of it.

Fortunately, things are starting to change.

Information Week reports on a recent study, in which two-thirds of hospital administrators surveyed said that their facilities now use telemedicine, and 87% of them are satisfied with the results. Some insurance companies are now rolling out limited trial-runs of telemedicine systems. It is likely that as these trials are conducted, the benefits to both costs and patient care will be self-evident. Only then will the insurance industry start to embrace telemedicine in the mass-market.