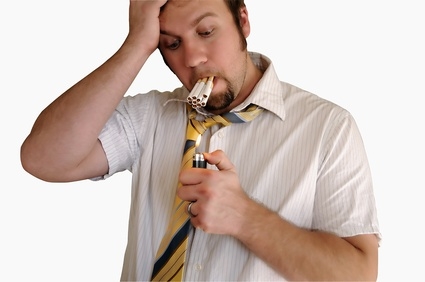 You’ve probably heard the claim that if it’s been a stressful day, a cigarette will help calm the nerves. Well, several studies now prove that the only stress a cigarette can put at bay is the stress caused by not having one.

In fact, a study recently published in the August edition of the journal Addiction discovered that within a year of quitting smoking, ex-smokers experienced lower stress levels than they had when they were lighting up regularly. In order to come to this conclusion, researchers involved in the study monitored a group of 469 people who had been hospitalized for heart disease. Those who quit reported feeling less stressed a year later.

At the start of the study, nearly 85% voiced their belief that smoking actually helped them handle the stressful events in their lives to a certain degree.  Only a year later, just over 40% had not returned to smoking.

When acknowledged from both a psychological and physiological standpoint, smoking is clearly not the healthiest choice, so why are nearly 12 million cigarettes smoked worldwide each minute?

Nicotine addiction is one of the most difficult demons to battle for many people. The immediate and long-term harmful effects on the body are often outweighed by the momentary “calming” effect many smokers report feeling at the moment they take that first drag. Many people turn back to smoking, or believe they won’t be able to quit, simply because as soon as the nicotine leaves the body, withdrawal begins and the next cigarette is soon mindlessly in hand. Perhaps it is easier to understand when you look at the immediate symptoms associated with quitting, as reported by the American Heart Association.

When you consider the above symptoms, it becomes a bit more clear why the stress experienced by smokers in between cigarettes, or while trying to quit, can be quite overwhelming. Now compare these with the immediate effects experienced by the smoker upon lighting up a cigarette.

Those who have never smoked may find it difficult to understand why anyone would choose to continue a lifestyle that is the cause of one in five deaths in the United States alone, but when you look at the immediate affects of going sans cigarette versus continuing the addiction, you can see that quitting is no walk in the park.

The good news is that nicotine withdrawal does get easier over time. Many say the cravings are most intense within the first three days, but after the first month they begin to diminish. If motivation is what you are looking for, just take a look at what else is going on in your body when you quit smoking. 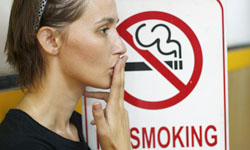