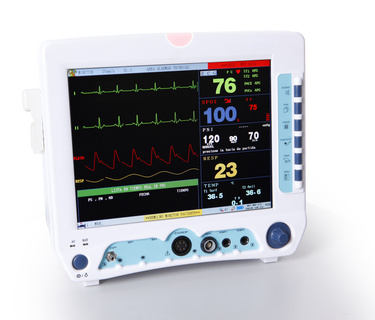 Up until now monitoring a patient’s vital sign has required bulky equipment, a sea of wires and uncomfortable electrodes but thanks to new advances in technology that may be all about to change. Researchers announced, in Friday’s edition of the journal Science, that they have developed a small wireless sensor that is worn much like a temporary tattoo and monitors everything from temperature to brain waves and muscle movement.

The idea was to create a sensor that has many of the same attributes as human skin. The polyester backing of this bandage like device can move, stretch and wrinkle allowing it to conform to the surface of the skin without interfering with motion. The device is able to adhere without any kind of tape or adhesive instead it employs the van der Waals force, named after the Dutch scientist Johannes Dideril van der Waals, the force occurs when there is a weak molecular attraction between two surfaces that allows them to temporarily hold together; this is the same force that allows a gecko to climb a vertical surface. Just like a temporary tattoo the device is mounted on a water-soluble surface and attached by brushing with water. The device itself is so small that it is only as thick as a strand of human hair and approximately the size of a postage stamp. It contains a wide array of sensors, an antenna, a conductive coil and solar cells for power and LED’s. In tests so far the device has remained in place for about 24 hours but the hope is that it will be able to remain for about two weeks before the sloughing of dead skin cells makes it fall off.

The potential applications of a device this sophisticated are only starting to be realized but researchers are optimistic that it can be applied to not much more than just monitoring vital signs. In their initial demonstration they showed the device controlling a computer mouse by sensing muscle contractions in the neck, they also believe it will aid in speech by reading the larynx, allow people to better control  artificial limbs, detect brain waves and even be used to create bandages that can actively heal wounds through heat or electrical stimulation.

The device is not ready to hit the market quite yet though, researchers still have a few major hurdles ahead. While it is currently is equipped with an antenna so that it can transmit the sensors reading wireless over a radio frequency they have not yet developed a receiver or figured out how to establish a coherent system for all of it’s different attributes. A reliable power source still needs to be established as well, researchers are currently testing everything from induction through wireless coils to solar or battery power. While it might be years before the device hits the market its clear that scientists have moved one step closer to blurring the line between electronics and the human body.