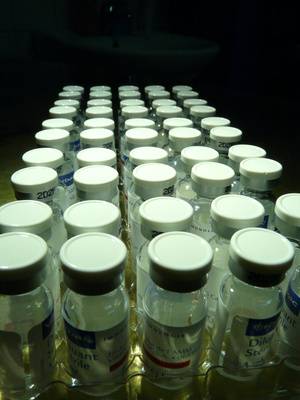 Despite doctors best efforts to alleviate parents fears, the rumor has still persists that the MMR vaccine can cause autism in children. Thanks to a new review by the Institute of Medicine hopefully these fears can finally be put to rest.

Ever since 1998, when Dr. Andrew Wakefield proposed a link between the MMR (measles, mumps and ruebella) vaccine and autism, there has been a growing segment of the population that shares the concern that vaccines may be doing more harm than good. Now in a new study by the Institute of Medicine in which more than 1,000 studies were reviewed to look for adverse reactions to eight common vaccines, researchers have once again been able to establish that vaccines are on the whole very safe and do not cause either autism or type I diabetes

There was a little bad news however. For some getting a chickenpox vaccine can lead to certain health problems years later. Pneumonia, meningitis or hepatitis can occur when the virus in the vaccine is reawakened in people with an unrelated health condition like HIV or cancer that weakens their immune system. On the whole these adverse reactions are extremely rare and usually short lived.

Researchers also found that 6 of the vaccines reviewed can occasionally trigger an allergic reaction called anaphylaxis. They recommend that this be addressed by having children wait in their doctor’s office for 15 minutes after injection.

For years the government has been trying to establish guidelines for claims against vaccine manufacturers concerning harm done by vaccines. The program was created after a flood of children who received the whole-cell pertussis (or whopping cough) vaccine developed seizures but ultimately it was discovered that most of those children suffered from Dravet syndrome, a form of epilepsy, that just first manifested itself after the vaccine was administered. Right now the government only compensates the families of children who suffer negative effects that can be reasonably attributed to vaccinations like fainting, allergic reaction and seizures but when evaluating what else to add to the list of risks there has been growing pressure to add autism. In light of the latest research by the Institute of Medicine, one of the country’s most esteemed authorities on public health issues, perhaps this argument can finally be laid to rest.