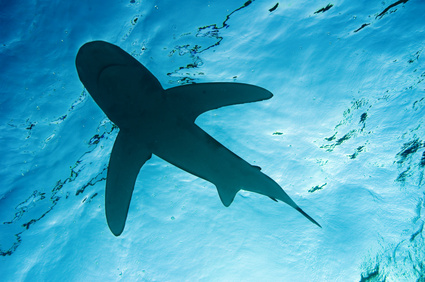 In what is sure to be a major scientific breakthrough for the medical community, researchers have announced that they have pinpointed a shark compound that can kill viruses in humans. A cholesterol like compound called squalamine has been found in the tissue of dogfish sharks that when applied to humans can cure illnesses such as dengue fever and hepatitis.

Researchers had been studying sharks in search of antibacterial agents, sharks are completely immune to viruses and many types of diseases, when they discovered squalamine. Up until now nothing like squalamine has ever been discovered; it is believed that the molecule works by preventing the growth of blood vessels. The positively charged molecule is able to stick to the inner membrane of a cell and remove any of the positively charged proteins that a virus needs to reproduce all without harming the cell itself. Researchers even believe that squalamine could be applied to prevent cancer cells from multiplying.

Squalamine is already in clinical trials in humans, to treat cancer and eye disorders, but the applications could go much further. Currently we have no effective way to treat viruses. The few medications available are highly specific and must be reformulated all the time to keep up with ever mutating viruses but squalamine could provide the key to finally making universal antiviral drugs. Already scientists have had encouraging results in treating hepatitis B and D, yellow fever and dengue fever in lab tests and with their capability to synthesize squalamine in the lab no sharks are needed to run tests or produce medicine.

While currently squalamine is only able to enter certain cells like blood vessels, capillaries and the liver it is hoped that a squalamine based drug could be customized to fight a wide range of viruses in other types of cells.

While it is too early to tell just when this new family of virus fighting drugs could hit the market they are performing extraordinarily well in the lab, proving highly effective with few negative side effect. Perhaps in light of this new discovery people will stop fearing sharks as predators of the deep and see them as the 700 million year old evolutionary wonders they really are.